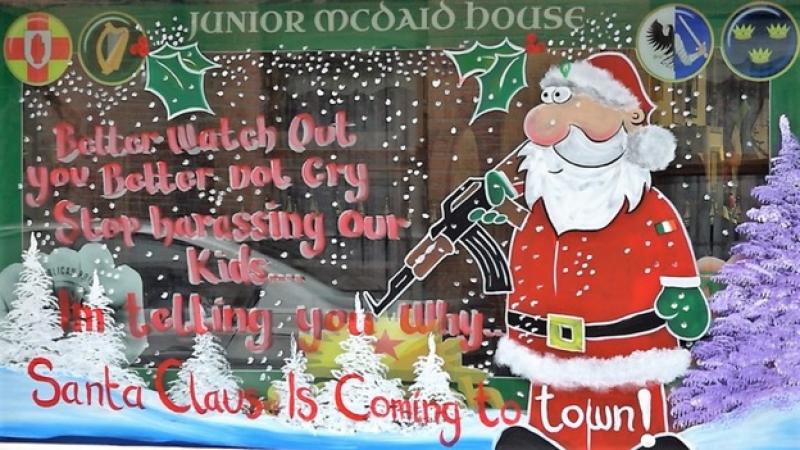 The window display at the offices of republican party Soaradh at Chamberlain Street in Derry.

The partner of journalist Lyra McKee who was shot dead during rioting in April was 'very raw' about a display at the Saoradh offices of a Santa Claus with an AK47 Derry Magistrate's Court heard yesterday.
A police officer said she had been talking to Sara Canning in relation to the display as the PSNI objected by a proposed bail variation application by one of the men charged in connection with the rioting on April 18 when the journalist was shot.
Paul McIntyre (52) of Ballymagowan Park in Derry was applying to be allowed to return to his home address as his landlord had given him notice to quit.
The police officer told the court that the landlord said he had been led to believe the arrangement was only for a few weeks and was not fully informed of the situation.
However, his son was returning from Australia on December 16 and he needed the property before that date.The officer said that the landlord was also claiming he had not been paid any rent for the property.
Police objected to the bail variation on the grounds that McIntyre's current address was some miles from the scene of the incident but his home address was within the exclusion zone imposed by the High Court.
It was then the officer made her comments about Sara Canning which led to an objection from the defence.
Mr Eoghan Devlin, counsel for McIntyre, said he had to object on the grounds that what an organisation did had 'nothing to do with a bail variation.'
He said there were three statutory grounds for opposing a bail variation and 'a display by an organisation had nothing to do with that the law is the law.'
Mr Devlin said that the statutory objections were witness intimidation and fear of further offences.
The barrister said of the risk of witness intimidation there was no evidence that McIntyre had engaged in that.
The officer said that McIntyre was' heavily involved and associated with the group Saoradh' and if allowed into Creggan could be tempted to interfere with witnesses.
She said police were concerned he could succumb to temptation.
The barrister said it was not about police concerns but evidence and there was no evidence.
Mr Devlin asked had the witnesses identified a man who was five foot eight ot five foot ten while the defendant was five foot two.
The officer said she had no statements with her so could not comment.
District Judge Barney McElholm said he felt 'very strongly' there was a fear of witness intimidation.
He refused the bail variation and adjourned the case until January 9.