Two little Derry girls have delivered an early Christmas present to the Neo-natal Intensive Care Unit (NICU) nurses who helped save their lives. 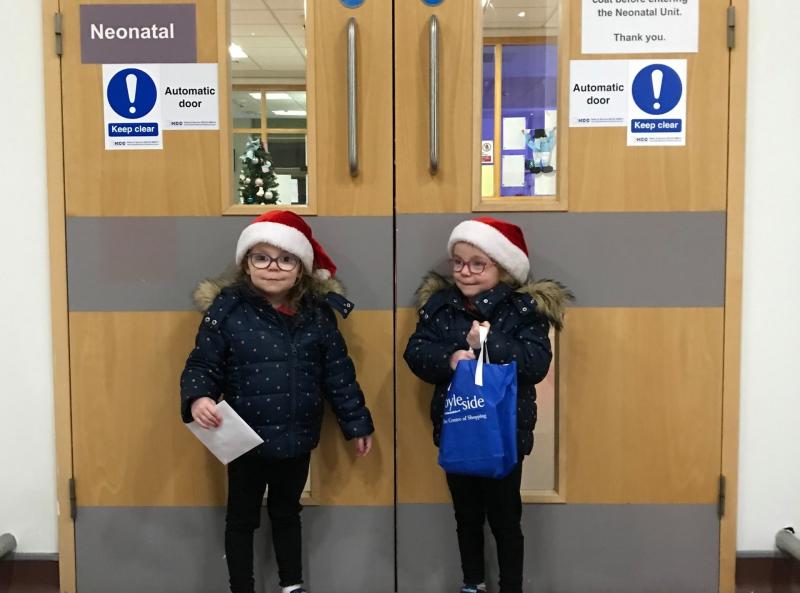 Saoirse and Saorlaith  McLaughlin delivering their gifts to the NICU staff at Altnagelvin Hospital.

Two little Derry girls have delivered an early Christmas present to the Neo-natal Intensive Care Unit (NICU) nurses who helped save their lives.
Saorlaith and Saoirse McLaughlin were born seven weeks early with a potentially fatal condition called twin to twin syndrome.
They were nursed back to health at Atnagelvin Hospital's Neonatal Intensive Care Unit where they spent the first few weeks of their lives.
The girls are now aged four and are happy and healthy, but their mum and dad Bob and Michelle McLaughlin have never forgotten the nurses who cared for them when they were so vulnerable.
The couple have since raised thousands of pounds for the NICU for supplies and equipment to help other babies who are born sick or too soon by holding an annual sponsored walk.
But this year they wanted to give a special thank you to the NICU 'earth angel' nurses and arranged a huge raffle and quiz night which raised £1,420 for the staff.
The money was spent on 44 Foyleside vouchers and a £100 M&S voucher which were hand delivered by Saorlaith and Saoirse earlier this week.
"These nurses fought our battles in the NICU when we had no one else to turn to, like many other parents," explained Mr McLaughlin.
"They are the main reason we fundraise for the NICU at Altnagelvin and I think everyone agrees they deserve a thank you.
"They are our earth angels."
The nurses in the Neonatal ward are highly trained and provide one to one care round the clock care for the babies.
"It is nice to let our nurses know that we appreciate them and everything they do for our children," continued Mr McLaughlin.
"We hope we put a smile on their faces."
Earlier this week Saorlaith and Saoirse donned their Santa hats to pay a surprise visit to the ward where they were reunited with three of the nurses who had looked after them.
"One of the staff Oonagh hadn't seen the girls since they were born so I think she got a bit of a shock," said Mr McLaughlin.
"She recalled the sleepless nights she used to have worrying about the girls.
"It's lovely to know they remember them and shows how much they care and they were really pleased and grateful for the gifts they received.
Mr McLaughlin added: "I would also like to thank all the local businesses who so generously donated to the raffle and the people who bought tickets and took part in our quiz night at the River Inn."