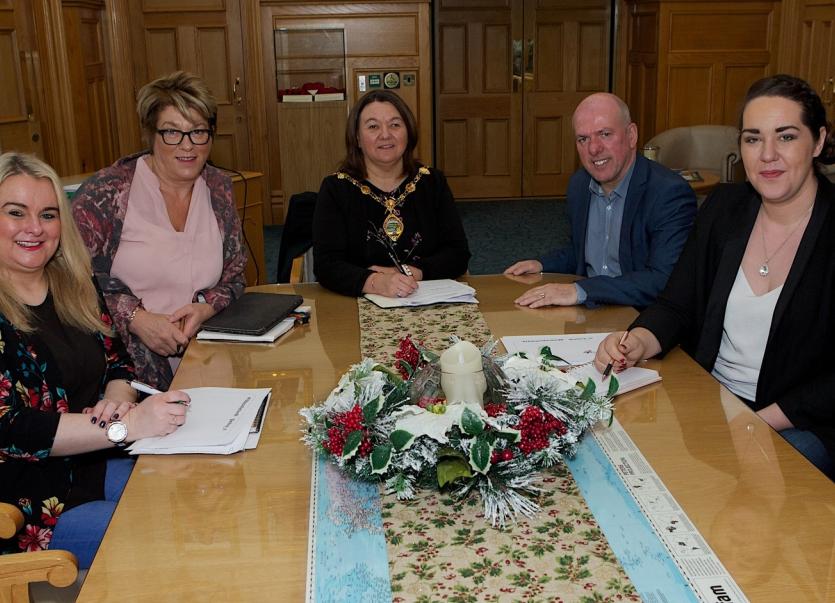 Mayor of Derry and Strabane Michaela Boyle has launched her message on domestic abuse at Christmas. Photo - Tom Heaney, nwpresspics

The Mayor of Derry City and Strabane District, Councillor Michaela Boyle, is urging people to be aware of the escalation in domestic violence over the festive season, during the international 16 Days of Action Campaign running until December 10.
Derry City and Strabane District Council Members gave their unanimous support in October to a motion setting out Council’s commitment to placing Domestic Violence high on its agenda in terms of supporting both staff and agencies offering help on the ground to victims.
The latest PSNI figures reveal a rise in the number of reported incidents of domestic abuse locally, with Derry and Strabane recorded as the third highest out of the eleven council areas in terms of domestically motivated incidents and crimes.
The Mayor this week discussed a number of ways in which Council can assist in raising awareness of the issues of domestic violence, sexual crime and coercive control, particularly in the run up to Christmas when incidents traditionally see a spike.
“We are currently in the middle of the 16 Days of Action Campaign which encourages businesses to support staff enduring the ordeal of domestic abuse,” Mayor Boyle explained. “As a Council it’s important that we keep the issue high on the agenda and offer support where we can to both staff and the public in terms of sign posting them to the right agencies.
“Council is currently working on a new policy addressing the issue for staff, and we will be exploring other ways to offer help to those who need it. It’s deeply concerning that the number of reported instances of domestic abuse continue to rise. Christmas in particular can bring with it additional stresses such as financial pressure and increased alcohol consumption which can exacerbate tense domestic situations.
“I would ask people to be aware of the signs of domestic abuse and to please encourage anyone who may be a victim to seek help before it’s too late.”
In the twelve months between July 1st 2018 and June 30th 2019 there were 3,051 domestic abuse incidents and 1,519 domestic abuse crimes recorded locally – this equates to over eight recorded incidents and four recorded crimes per day. Over the last four years domestic abuse levels have peaked in December. 69% of crime victims were female and 31% were male.
A number of local organisations offer support and refuge to victims throughout Derry and Strabane. They include Foyle Women’s Aid, Men’s Action Network and La Dolce Vita. Victims of domestic abuse can also receive support through the Policing and Community Safety Partnership’s Safer Homes Initiative with tailored additional security items available for homes.
The PCSP also sits on the Western Domestic and Sexual Violence Partnership which is led by the Western Health and Social Care Trust.  This is a multi-agency partnership where the needs of domestic abuse victims are heard and where individuals and agencies can come together to generate positive action to eliminate domestic violence from our communities.
Suzanne Mahon, Head of Service Gateway and Family and Intervention Services for the Western Trust and chair of the Western Domestic and Sexual Violence Partnership said: “This is a multi-agency partnership made up of both statutory and voluntary agencies. The partnership aims to ensure a consistent and coordinated approach to service provision and response to victims in alignment with the regional strategy developed by DOH and DOJ. It is a long established partnership with all agencies working closely together to best meet the needs of victims across the Western Trust area.”
A special joint conference on the issue of Parental Alienation, a form of control or manipulation often used against a partner during a separation, will take place in April 2020. The Parental Alienation United As One  Conferences will take place in the City Hotel, Derry and Croke Park, Dublin, organised by the La Dolce Vita Project in conjunction with Parental Alienation Europe.
A full report on Council’s progress in working towards delivering on its commitment regarding the issue of domestic violence and coercive control will be brought before Members in the New Year.