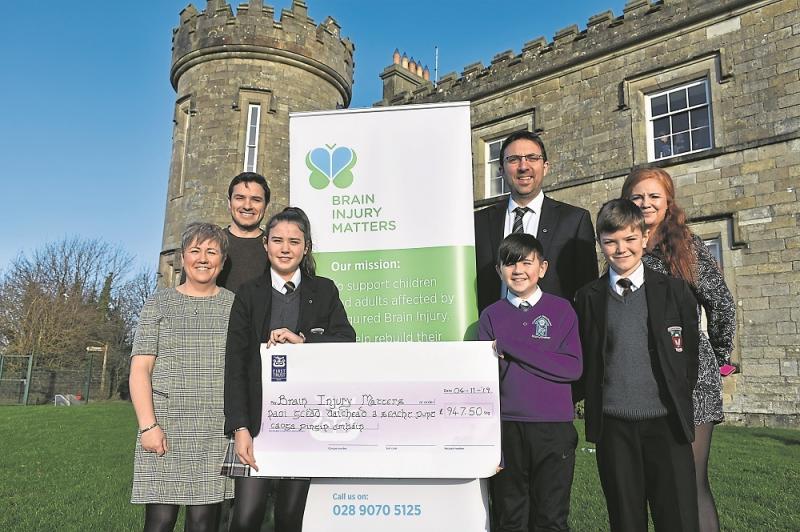 Gaelcholáiste Dhoire staff and pupils presenting a cheque for over £947 to the Brain Injury Matters charity. The cash was raised after staff took part in Movember.

Visitors to County Derry’s Irish-Medium Post Primary School in Dungiven Castle might have been surprised to see the male members of staff sporting various styles of facial hair during the month of November.
The cause was not something in the water and the school did not travel back in time to the 1970s. Staff supported a “Movember” campaign to raise money for a very worthwhile cause which was very well supported and raised £947.50!
Brian Injury Matters (BIM) is a local charity and was founded in 1999. It aims to help and support children, young people and adults who have an acquired Brian Injury to live as full a life as possible and to aid the process of rehabilitation. The charity relies very heavily on support from the public and Community Engagement Officer, Treasa Rice made the trip to Dungiven to receive a cheque from the school this week.
Mary Uí Dhuibhne who works at the Gaelcholáiste had high praise for the charity. Mary’s son Peadar Pio acquired a brain injury following an accident when playing two years ago and BIM provided much needed support for Peadar Pio and his family.
Peadar Pio, who is currently in Rang 7 in Gaelscoil Neachtain, is now making excellent progress in his recovery, he is back playing football (with head protection) and is looking very much forward to joining the Gaelcholáiste team next year when he transfers to the school in September.
Although the end of November witnessed the end of the fund raising, some members of the staff appear to have grown attached to their new look and have decided not to shave just yet - to the consternation of their co-workers! It might be the case that another campaign may be called for to encourage a clean shaven appearance among staff in the future!
In another fundraising event for the same charity, a screening of Miracle on 34th Street will take place at An Coire, Maghera on Sunday, December 15.
Doors open at 4.30pm and there will be a raffle and spot prizes.
All proceeds in aid of Brain Injury Matters. Those wishing to attend can book online at  braininjurymatters. org.uk.