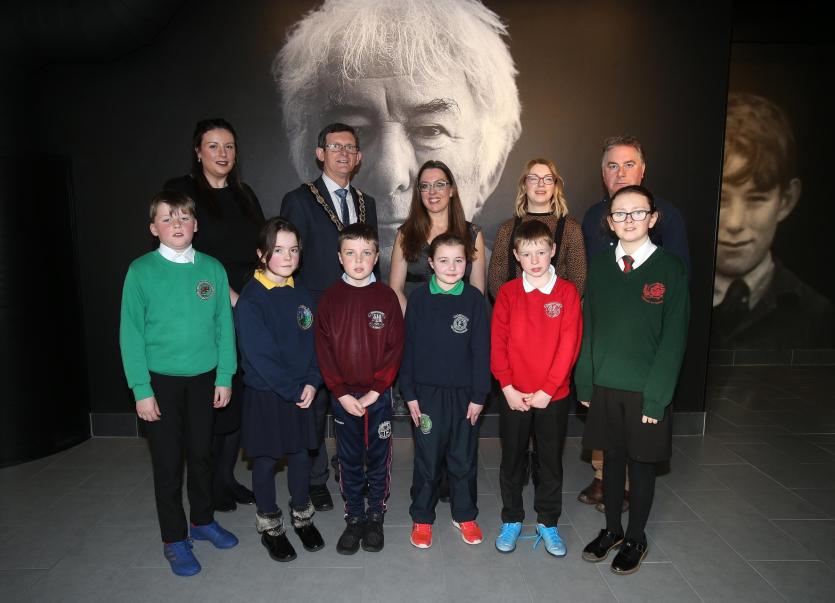 Local school pupils with HomePlace and council representatives at the launch of Lí Bán.

A Mid-Ulster schools’ creative writing project has breathed life into a forgotten local legend, the story of Lough Neagh mermaid, Lí Ban.
The origin tale of the lake, known as ‘The Death of Eochaidh son of Mairid’ is over a thousand years old in oral tradition, but has now been brought up to date in a new telling by children’s author, Máire Zepf.
Lí Ban’s story is tale bursting with colour, from giant horses and ancient gods to mermaids and monks.
It tells of a young girl who is transformed into a mermaid when a magical curse floods their ringfort, creating Lough Neagh (Loch nEathach, named after her father, Eochaidh.)
Six Irish-medium primary schools in the Mid-Ulster area have been working on the story with Máire Zepf over the past months, writing their own creative responses and drawing original illustrations for the story.
The young writers and illustrators from Dungannon, Coalisland, Magherafelt, Ballinascreen, Cookstown and Tirkane then came together at the Seamus Heaney HomePlace in Bellaghy on 4th December for a collaborative showcase performance of their work, to celebrate the project and to hear the story told in its entirety.
The story of Lí Ban is deeply rooted in the locality of the area, mentioning local places by name. References to the legend can also be spotted in many local place names.
The project has been funded by a partnership between the Irish Writers’ Centre in Dublin and Mid-Ulster District Council.
Martin Kearney, Chair of Mid-Ulster District Council attended the event.
He said: “The story of Eochaidh and Lí Ban shows just how rich and deep our local culture really is. Watching the children take it to their hearts today has been a lovely experience”
Commenting on the project, Máire Zepf said: “It was such a joy to unearth this gem of a local story with the children and to see their intense excitement about such an ancient tale. Hopefully, we can be assured now that Lí Ban will live on now for the next generation.”
Hilary Copeland, Acting Director of the Irish Writers’ Centre added:"The Irish Writers Centre is delighted to support the Lí Ban project. Our ‘writer-led’ programme offers writers the opportunity to develop their own creative projects, making use of their skills and experience with language and storytelling. We are grateful to Foras na Gaeilge for their continued support of Irish literature projects as Gaeilge.’