Sinn Féin Westminster candidate for East Derry has said this is the election of a generation and an opportunity to bring people together. 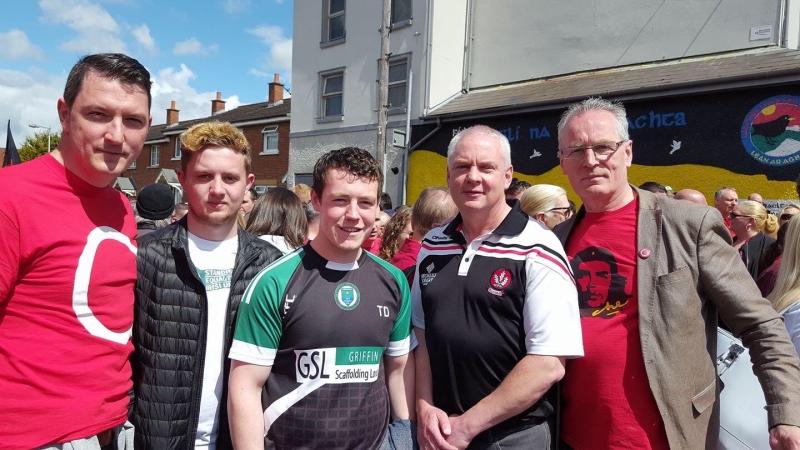 Sinn Féin Westminster candidate for East Derry, Dermot Nicholl has said this is the election of a generation and an opportunity to bring people together.
Cllr Nicholl said: “This election is about Brexit and it is about our future.
“Sinn Féin is standing in this election on a strong, anti-Brexit platform.
”On Thursday, December 12 people right across the North and in East Derry have an opportunity to vote to reject Brexit and for a better future.
“For the past two and half years DUP MPs have misrepresented the expressed democratic will of people here who voted to reject Brexit.
“This election is the opportunity to make it clear that the DUP do not speak for the majority of people here.
“As far as Sinn Féin is concerned there is no good Brexit and by voting for Sinn Féin, you’re voting to put your own best interests first.
“By voting for Sinn Féin you’re voting to prevent a hardening of the border in Ireland; you will be voting to safeguard the Good Friday Agreement and for the protection of jobs and your livelihood.
“You will be also sending a strong and clear message once again to London and Brussels that we haven’t consented to a Brexit which is being foisted upon us against our democratic will.
“Over the past three years it has also been clearly exposed that Westminster is in chaos and that the British Parliament will never act in the interests of people here.
“Sinn Féin has used our political clout wisely and where it counts - in Capitol Hill, the Dáil, Brussels and Downing Street.
“We’re on the EU side of the negotiating table and with our MEPs, MPs, TDs, MLAs we’ve certainly made a difference.
“Sinn Féin has also delivered for East Derry.
“We have led the way by decentralizing the DAERA headquarters to Ballykelly and bringing high quality public sector jobs to the north west.
“As Minister for Infrastructure, Chris Hazzard delivered the A6 and the Dungiven bypass after decades of waiting.
“Sinn Féin education ministers invested in the schools estate across the constituency and we have also delivered on community and sports facilities.
“Sinn Féin is committed to delivering on investment and jobs across the constituency and improving the infrastructure including roads and broadband.
“Sinn Féin is also committed to protecting our environment and natural heritage, and to effectively tackling the Climate Emergency through urgent and concerted action.
“Sinn Féin remains fully invested and committed to the Good Friday Agreement.
“The current political impasse is unsustainable and unacceptable and Sinn Féin stands ready to form a credible executive.
“We want to see a new Assembly and a new kind of politics in the New year is what we’re working towards.
“We want an Executive which is to be credible, delivering on issues such as public sector pay, safe staffing levels in the health service, investment in our schools, economic policies that deliver prosperity for all and that invests in rural communities, and a mitigation package that protects people from Tory welfare reform.
“This is the election of a generation because what the people decide now will shape the direction of our politics, economy and future for years to come.
“Discussion about our constitutional future is clearly on the agenda.
“It is now a question of when not if the referendum on Irish unity will be held.
“In April 2017, the EU made a declaration which says that in the event of a successful referendum on Irish unity, the North would automatically come back into the EU with the rest of Ireland.
“Irish unity is a means to enjoy many more benefits than what the union with Britain has on offer.
“A stark choice is opening up between the narrow, inward-looking vision of Brexit Britain and the open inclusive vision of a New Ireland.
“We’re without doubt entering a decade of opportunity where the freedom to choose our own future will be decided by all of the people on this island alone.
“The opportunity now exists over this new decade to bring people together.”