Saturday's Apprentice Boys of Derry annual Shutting of the Gates commemoration passed off without incident. 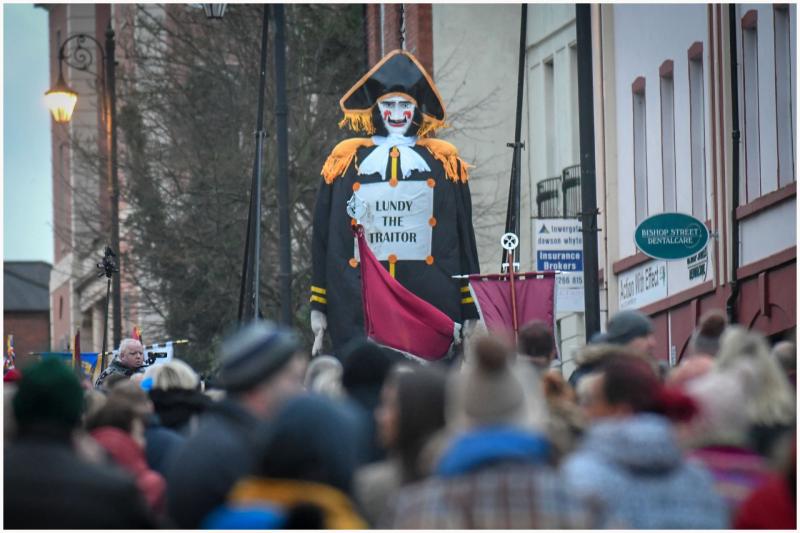 Saturday's parade passed off without any incident.

Saturday's Apprentice Boys of Derry annual Shutting of the Gates commemoration passed off without incident.
Several thousand Apprentice Boys paraded in Derry in the annual Lundy parade.
About 3,000 members of the order and 23 bands paraded around the city centre before a religious service in St Columb's Cathedral.
Civic leaders had called for respect on all sides ahead of the event.
In August, the Larne-based Clyde Valley Flute Band  caused controversy by parading with Parachute Regiment and Soldier F emblems on their shirts.
The Soldier F emblems angered the Bloody Sunday families and the Apprentice Boys  later said they recognised the potential upset caused to nationalists.
Thirteen people were shot dead when members of the Army's Parachute Regiment opened fire on civil rights demonstrators on Bloody Sunday in Derry in 1972.
An ex-paratrooper, known as Soldier F, faces two counts of murder and five of attempted murder.
Governor Graeme Stenhouse, pictured on the right, had called for a "peaceful and enjoyable day" ahead of the paradePeople lined the streets as the parade made its way around the city centre
The Police Service of Northern Ireland said there were no issues during Saturday's main parade, which passed off peacefully.
Graeme Stenhouse, the governor of the Apprentice Boys, echoed a view from civic leaders that it was important to restore good relations and promote mutual respect in the city.
"We have to remember this is a predominately nationalist city but having said that, we have every right to parade in this city," he said.
"We have been around for over 300 years, so it is only correct that we get that right - to celebrate our culture and our identity but as always conduct ourselves in the proper manner."
The Lundy Day parade is a commemoration of a historical event in 1688
The main parade ended with the burning of an effigy of Lt Col Robert Lundy, known as Lundy the Traitor.
Lt Col Lundy, who once held the title of governor of Derry, gained his reputation for treachery among unionists due to his offer to surrender to the Jacobite army.
The marchers commemorated an event known as the Shutting of the Gates - when 13 apprentices locked the walled city's gates against the approaching army of the Catholic King James II in December 1688.
The Siege of Derry lasted 105 days and cost more than 10,000 lives, the majority of them civilians.