Loughs Agency has been working with groups of volunteers to clean up the banks of the River Foyle. 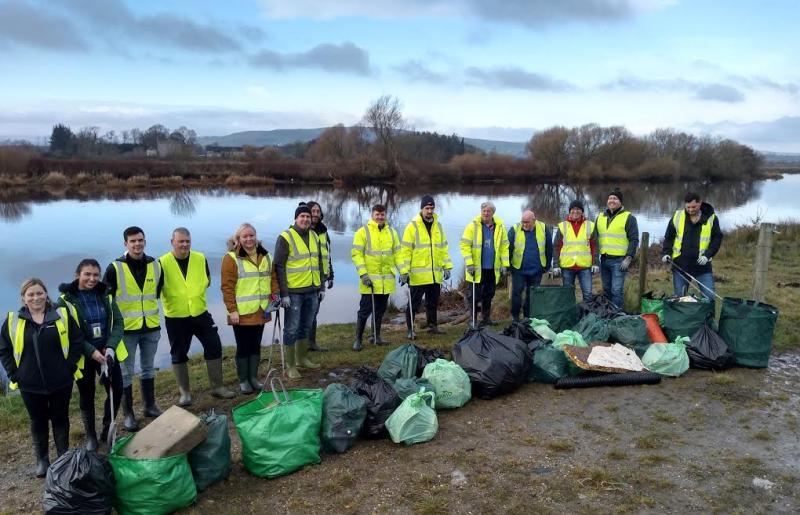 The Seagate volunteers who took part in the clean up.

In the last few weeks, Loughs Agency has been working with groups of volunteers to clean up the banks of the River Foyle.
The Foyle Ambassadors, a group of young environmentalists, completed a clean up on the upstream bank of the River Foyle near Strabane Canal with the help of TV presenter, Derry man Joe Mahon and his production crew who were filming in the area. The young people, and Joe, did a great job with over a dozen bags of rubbish removed.
A team of Ulster Bank branch managers completed litter pick on the banks of the River Foyle, close to the mouth of the old Strabane Canal. Local director, Chris McGuiness, said “even though the amount of plastic waste was shocking this was an enjoyable and very worthwhile activity for our team.
“We would definitely be interested in doing of this sort of environmental activity in the future.”
Finally, a group of volunteers from Seagate took part in bank downstream of Strabane Canal. The volunteers could not believe how much plastic waste had accumulated in such a beautiful location. Close to 30 bags of rubbish were removed.
The Loughs Agency’s community engagement officer, Allan Bogle, said afterwards “this is the most rubbish I have seen collected during a volunteer litter pick. It is a great feeling to return this natural area to the way it is supposed to look.”
Sharon McMahon, chief executive at the Loughs Agency said ‘rivers are an important habitat for fish and wildlife.
“Sadly, pollution, including litter and plastic gather in and along the rivers, often in remote places.  River clean ups are a great way to improve our rivers and make them a more enjoyable place to visit.
“As part of our community engagement programmes we are pleased to facilitate opportunities which enable the local community to take an active part in improving their environment.”