Firefighters from Northland Road and Crescent Link turned out in force on Thursday last to say farewell to Red Watch Commander James Ross who retired after almost 30 years sterling service to the city. 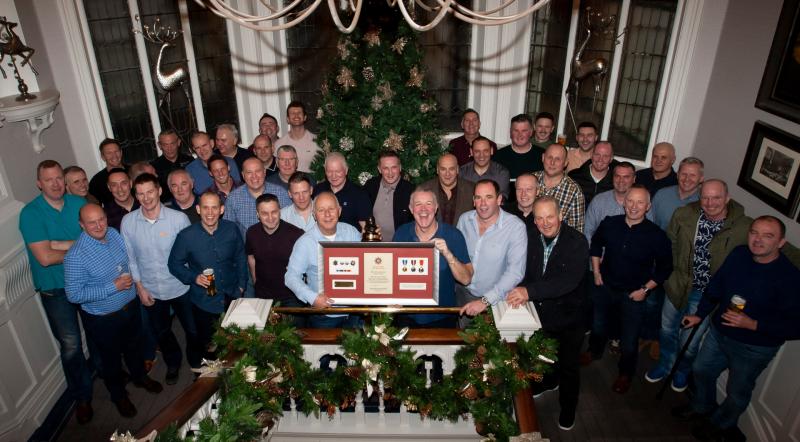 Firefighters from Northland Road and Crescent Link turned out in force on Thursday last to say farewell to Red Watch Commander James Ross who retired after almost 30 years sterling service to the city.
The affable firefighter joined the service in February, 1991 and served in both Northland road and Crescent Link fire stations over the years, taking part in many of the most serious shouts throughout the Troubles.
Quoted as saying he never got up in the morning and didn’t look forward to going into work, Jim said he would treasure great memories of working with some of the finest firefighters in the country throughout his long years in the service.
“I had the honour of serving with some great people. The likes of Martin Roddy, Andy Russell, Paul Deery and Tony Fleming, to mention a few. These guys taught me a lot as I came up through the ranks and I will be forever thankful to them.
‘The Fire Service is one big family and everyone had each other’s back. I worked with a great bunch of lads at both fire stations and had many happy years in Red Watch.’
Jim said he hoped to take a few months off and relax and take in a few foreign holidays, adding he would miss the Service and intends to keep in touch with his former colleagues.
“I will miss the boys, of course, and it will take a bit of getting used to.”
Reminiscing on some of the more “hairy” shouts he took part in over the years, he continued: “I remember the serious trouble that kicked off in the city over the Drumcree situation a few years ago. We were in the middle trying to put a fire out with petrol and blast bombs coming from one side and plastic bullets from the other.
“A notable event was three rescues in a 45-minute period late one night. We pulled people from a building in Nicholson Square, minutes later more at Duncreggan Road before rushing to Shantallow’s Ardnamoyle Park for another. I think it was 14 people in the three shouts. Never known it to happen before and hope it never happens again. And on a lighter side, he recalled working on night shift and getting a call to a car fire in Foyle Street car park.
Jim recalled: “We got out of the appliance and the car was well alight. I was putting water onto the fire and I said to my mate that car looks like mine. I went around to the front and checked the number plate - it was mine!
“Margaret, my wife, had been up at St Columb’s Hall at choir practice. No sympathy from the boys either. When we went back to the station they were trying to sell me 'hot' cars and asbestos seat covers.”
The popular firefighter was well supported at Thursday night’s presentation with over 50 firefighters in attendance at the Bishop’s Gate Hotel with many speeches praising Jim and wishing him a long and happy retirement.
And what does the future hold for Jim? He said: “After a few holidays I hope to carry out some voluntary work with local dementia groups. My late mother suffered from the disease and it would be nice to give something back in her memory.’