A candlelight vigil was held in Derry on Monday night ast to mark the first anniversary of the death of murder victim, Edward Meenan. 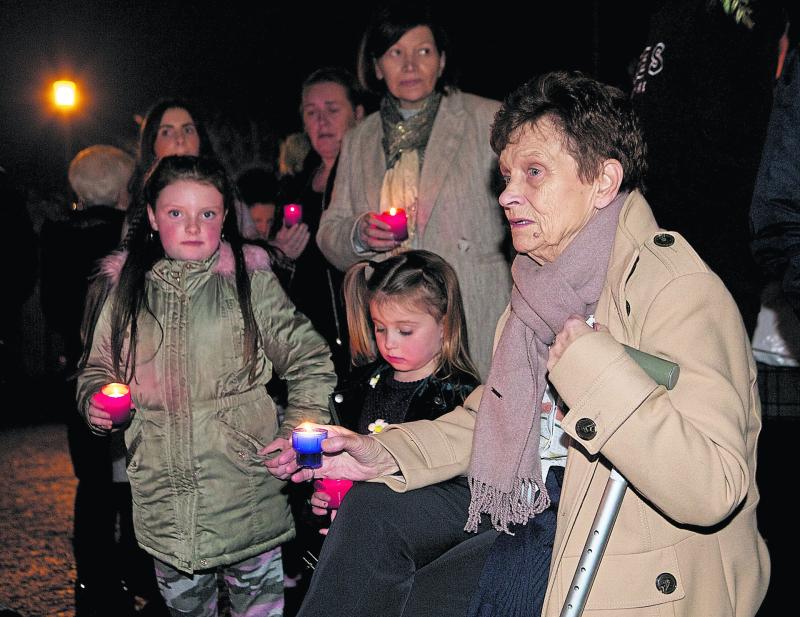 Edward Meenan's mother was among those who attended the candlelight vigil.

A candlelight vigil was held in Derry on Monday night ast to mark the first anniversary of the death of murder victim, Edward Meenan.
Family and friends gathered at the spot in the laneway behind Creggan Street where the body of the 52-year-old father-of-nine was found in the early hours of the morning of 25 November last year.
He had sustained numerous injuries, including 40 stab wounds.
In a statement, a spokesperson for the Meenan family said: "Tonight we gather here at the candlelight vigil and anniversary Mass to sadly mark the first anniversary of Eddie, our loved one, a father, son, brother, uncle and grandfather.
"This time last year, the news came to us of his death. The sadistic, horrendous, senseless murder that has left us all in a sense of shock, horror, emptiness, broken heartedness and disbelief.
"No words can describe the impact of the pain and brokenness  our family feels due to his murder.

"The Meenan family would like to extend their thanks to those that attended the candlelight vigil and Eddie's first anniversary Mass."

Four people have been charged in connection with Mr Meenan's murder – three men charged with murder and a woman charged with withholding information about the killing.
All four are due to appear at a preliminary enquiry at the city's Magistrate's Court next week.