‘Tour of Derry’ for Churches Trust at weekend

It was the city’s Tower Museum and a visit to the North West Islamic Centre on Saturday for members of the Churches Trust in the latest of the series of ‘Celebrating Commonality Celebrating Difference.’ 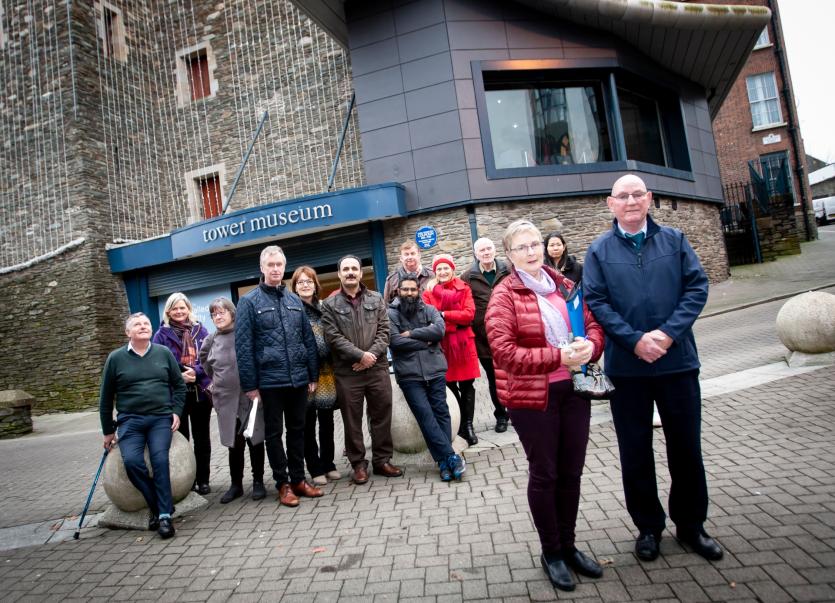 Fiona Fegan, CEO, Churches Trust and Gerry Lynn , DCSDC Tour Guide, pictured before the weekend’s ‘Tour of Derry’ at the city’s Tower Museum for members of the Churches Trust.

It was the city’s Tower Museum and a visit to the North West Islamic Centre on Saturday for members of the Churches Trust in the latest of the series of ‘Celebrating Commonality Celebrating Difference.’
‘Celebrating Commonality Celebrating Difference’ is a project supported by the European Union’s PEACE IV Programme, managed by the Special EU Programmes Body (SEUPB) and delivered by the Churches Trust.
Under PEACE IV small grants scheme the Churches Trust is coordinating a community education project which fits within Building Positive Relations priority area. The project brings participants from various faith traditions and none, within the Derry City Strabane District Council area and Donegal who together explore the Abrahamic Faiths primarily in context of the commonalities and differences between Judaism, Christianity and Islam. The group met for a local study visit on Saturday visiting the two sites of interest in the city.
Derry City Council’s tour guide Gerry Lynn gave a very informative and successful insight into the “Story of Derry” exhibition at the Tower Museum. The tour pays tribute to St Columba as the founding father of Derry and offers an insight to the early significance of Derry as an early Christian settlement.
The exhibition links the strategic importance of Derry both from a religious and militaristic perspective during the reformation and the plantation of Ulster, and pays tribute to a long history of different Christian churches in the city reaching out to each other.
Saturday’s visit took the group through the 20th century exploring Home Rule, WW1, the Easter Rising, Civil rights, the troubles; and concluded with the vision of a city coming together to create a better, brighter future for its children regardless of their religious traditions.
After the tour, the group visited the North West Islamic Association centre at Pennyburn where members of NWIA introduced them to their centre and giving a further appreciation of the Islam faith tradition and relevant aspects of worship and culture.
Fiona Fagan, Chief Executive of The Churches Trust paid tribute to Gerry Lynn at the Tower Museum for his interesting and entertaining tour which provided a balanced and thought-provoking account of the “Story of Derry”. She also thanked the North West Islamic Association for their welcome to the centre and their willingness to share their aspects of their beliefs and culture with the group.
‘The group were really enthralled today. Firstly, the excellent and informative tour at the Museum, enjoyed by all, and on to the Islamic Association’s premises at Pennyburn where the group also took part in a Q&A. It was a long but very worthwhile day for us and continues the many successes of the series in ‘Celebrating Commonality, Celebrating Difference.’