Derry girl features in calendar by 'Wouldn't Change a Thing' 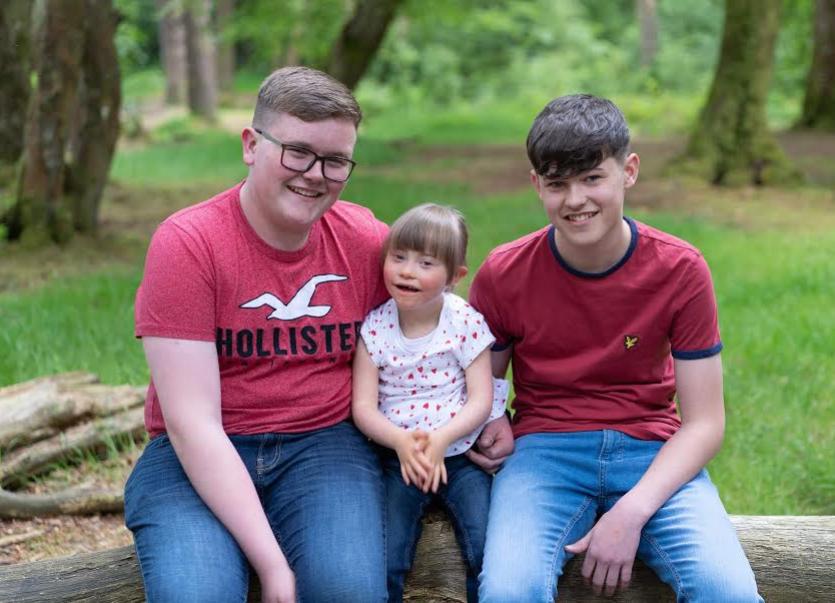 Maisie Colhoun and her big brothers, Thomas (17) and Christopher (16) who feature in a new calendar by “Wouldn't Change a Thin.” Photo: Jay Doherty.

An inspirational Derry girl has been chosen to feature in a calendar aimed at challenging perceptions of people born with an extra chromosome.
It was launched by the charity “Wouldn't Change a Thing” which aims to create a world where negative perceptions of Down Syndrome are a thing of the past.
Maisie Colhoun was photographed with her big brothers Thomas (17) and Christopher (16) to show the close bond they share.
"It's every teenager's worst nightmare to have to go and get their photograph taken but it just shows the brilliant family relationship they have," said their mum, Dawn.
"The two of them just love her and she loves them.
"They are just amazing with her and so caring.
"She loves the craic with them and they are so good together, so it's great for me and their dad Ally.
Local photographer, Jay Doherty, took the family to a woodland in Muff where he shot a selection of pictures.
"Maisie really, really enjoyed herself," said Dawn.
"She just loves being the centre of attention.
"Jay is an absolute gentleman and he is so good at what he does.
"The pictures are so beautiful."
Dawn and Ollie got involved with the charity because they believed in its message.
"We are trying to get away from the negative perceptions of Down Syndrome," Dawn explained.
"Treat people with Down Syndrome like everyone else and they will thrive like everyone else.”
Earlier this year, Maisie was chosen to feature in a book for new and expectant parents of children with Down Syndrome, which was also created by “Wouldn't Change a Thing.” It was designed to support parents and maternity units across Britain, and by featuring the positive experiences of families like the Colhouns it seeks to dispel the fear that can consume parents after getting a Down Syndrome diagnosis.
Maisie was born with two holes in her heart and underwent a major operation to repair them at just 18 weeks old. She is now about to turn seven and well on her way to overcoming some of the challenges life has thrown at her.
"Maisie goes to school at Ardnashee and she just loves it," said Dawn.
"Everyone in the school knows her and her teachers, Christine Eaton, Christine McCallion and Fiona McGrory, are just the best.
"Miss Maisie is a wee character and she can light up a room."
The “Wouldn't Change a Thing” calendar is available now from the charity's website priced at £9.99.