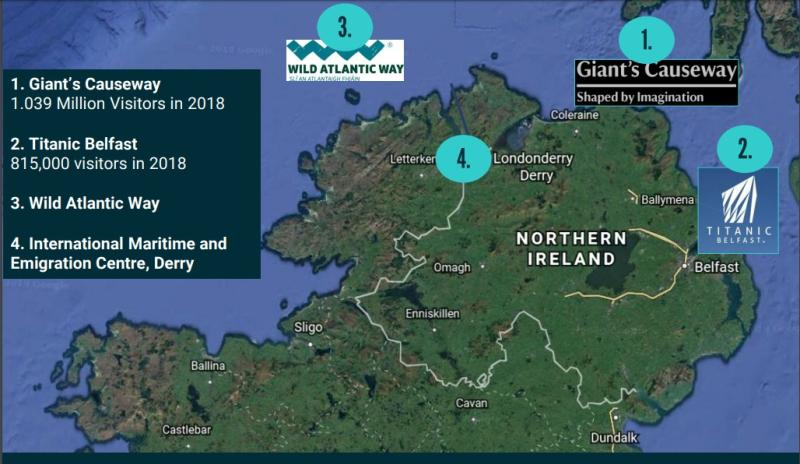 A marquee project with the aim of transforming Fort George into one of Northern Ireland’s major tourist attractions has been presented at a Derry council meeting.
Councillors were also briefed about “ambitious” plans to redevelop St. Columb’s Hall in the city centre.
Well-known businessman, Garvan O’Doherty, and Anne Marie Gallagher, Business Development Director at the Garvan O’Doherty Group (GODG) gave a presentation to members of the council’s Business and Culture Committee.
The first project outlined involves plans for an International Maritime and Emigration Museum at Fort George. It emerged that this could affect previous plans for a city side medical hub at the Strand Road site.
It would be an £80m iconic tourism project as part of a £150m-£200m mixed use development scheme comprised of an “interactive, immersive museum experience”, 5-star hotel overlooking the river, public realm development, office space incorporating a technology and research & development hub, plus two residential blocks with car parking.
The museum would showcase thousands of years of history in the North West taking in the first emigrant Colm Cille, Vikings, growth of the port, rich maritime heritage, mass emigration and World War II.
Utilising state of the arts AI, Robotics, and Virtual Reality it will aim to completely immerse visitors. A Futurism Zone will encourage the next generation to not only imagine what Derry was in the past but what it can be in future.
Those behind the project believe it will be a “world-class” tourism hub with the potential to attract 300,000-400,000 visitors per year and would be an additional docking attraction for the 100 ships that currently bring 200,000 visitors to Belfast Harbour each year. This will ultimately boost the local economy and create employment opportunities.

A second project was revealed at the meeting, namely the redevelopment of the 19th century St. Columb’s Hall which has been part of the fabric of the city since 1886.
“The Hall was a thriving hub for arts, culture and entertainment for six decades, but entered a period of decline at the turn of the Millennium as modern purpose developments were built close by,” Ms Gallagher explained.
Revolutionary thinkers appeared at the venue including Emmeline Pankhurst, Éamon de Valera,
Eoin McNeill and Laurence Ginnel as well as performers such as Roy Orbison, Chubby Checker, John
McCormack, Josef Lock, Dana and Val Doonican.
From 1962, programming at the Hall was led by Fr Edward Daly with the help of Frank Carson. Fr Daly recalled successfully booking The Beatles just a few weeks before their first number 1 hit – which put paid to their booking.
Laying out stark statistics, councillors heard how Derry was ranked last in a 2017 PriceWaterHouse Cooper Report on the economic health of 57 UK Cities. Citizens of Derry and Strabane have a lower life expectancy at birth than the rest of Northern Ireland.
Our unemployment rate is twice that of the rest of NI and has the highest number of young people claiming unemployment benefit in the UK, according to House of Commons briefing paper.
Derry is suffering from hereditary trauma, affecting mental health and well-being.
It is estimated that 39% of the NI population directly experienced troubles related trauma.
Laying out plans for its future and how to address some of the city’s woes, Ms Gallagher said the GODG took on a lease of St Columb’s Hall between 2012-2019 then purchased it. To date it has invested £1.5m.
A new charity organisation, St Columb’s Hall Trust, formed in Oct 2019 taking a 30 year lease on the space. It plans to “reawaken” St. Columb’s Hall through a £10m renovation programme between 2020-2022 with a further £12m investment in a Creative and Skills Quarter in the years thereafter.
It’s intended that it will house an iconic live music venue, ground-breaking creative therapy
centre of excellence tackling trauma, addiction, mental health & dementia. In addition it will be a
meeting place for thought and debate, will have an experiential café/restaurant
cinema and state of the art flexible office space.

Addressing the meeting, Garvan O’Doherty said Derry’s tourism product “isn’t strong enough” and something needs to be done to challenge Belfast.
He said the Titanic Quarter in Belfast attracted around 500,000 visitors last year. Over the first 3 years Titanic Belfast generated £105 million in additional out of state tourism spend for the Northern Ireland economy, sustaining 900 jobs each year in the wider economy, Mr O’Doherty is convinced Derry can replicate that.
Sinn Féin Councillor Mickey Cooper said he hoped that these plans could dovetail with the council’s own plans for a maritime museum. He added that he was “very happy” to support the projects.
Councillor Eamonn McCann, of People Before Profit, said he was conflicted about the plans and criticised the decision to construct “ugly brick buildings” either side of St. Columb’s Hall.
He compared St. Columb’s to Naples Opera House and described it as a “gem” which should be cherished for all of its history.
Meanwhile, DUP councillor David Ramsey said “private investment makes the world go round” before enquiring about investors. Mr O’Doherty said there would likely be cross-border investment, “it was called ‘the people’s hall’ and it needs to be returned to the people.”
He went on to say that in the past the city hasn’t been ambitious enough with projects, “we need to beat on the door of central government and say, ‘we want this now’.”
SDLP councillor Sinead McLaughlin said no-one could accuse Mr O’Doherty of being unambitious. Very few cities have major tourist attractions in the city centre, she said, in that respect Derry is unique and these “city centre treasures” need to be protected and invested in.
The city needs another world class attraction and she said 50% of funding for the Titanic Quarter came from central government.
Cllr McLaughlin insisted that an Executive needs to be in place to “right the wrongs of the past” in Derry. Referring to news of further medical school delays she declared, “shame on us”.
Aontú Councillor, and former GP in the city, Anne McCloskey, praised the “excellent projects” but she expressed concern that they could derail plans for a city side health hub at Fort George. In response, Mr O’Doherty felt the health hub could be situated anywhere in the city and believes it is imperative to look after both the economy and people of the city.
Cllr McCloskey concluded: “I’ll watch with interest and trepidation.”