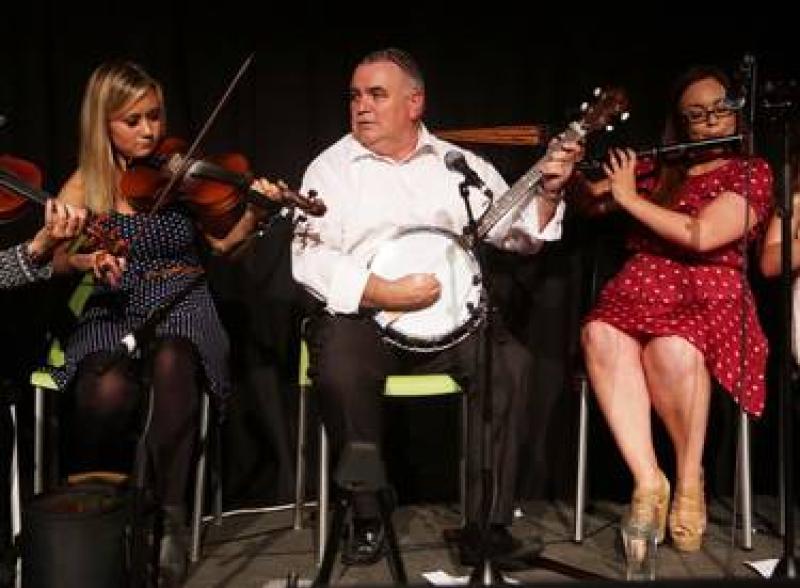 Brendan Molloy, chair of the County Derry board of the Comhaltas pictured centre.

The chairperson of a Derry branch of Comhaltas Ceoltoiri Eireann has moved to quell speculation over the return of the All-Ireland Fleadh to the city within the next few years.

On Tuesday last week, a post on the Facebook page of outgoing MP for Foyle Elisha McCallion said: “I am delighted to say that progress has been made to bring the All-Ireland Fleadh back to Derry!

“We need to do everything possible in the weeks and months ahead to get Fleadh back!

“Over the last two years I have been working to secure its return to the city and have been meeting DCSDC (Derry City and Strabane District Council) and representatives from all levels of Comhaltas, from the local branch, CCE Baile na gCailleach, to the top, to bring it back.

“I will continue to work with all involved to bring this great cultural event back to the city.”

In May this year the city was the venue for a highly successful and widely acclaimed County Derry Fleadh and in keeping with the rules that a chosen venue hosts an event for two years in succession will do so again in 2020.

Derry of course hosted Fleadh Cheoil na hEireann during the city’s year as City of Culture in 2013. That event, which attracted many thousands of people into the city, was a one-year exception to the customary two-year practice. The last time any city hosted the Fleadh for a single year was thirty-one years ago in Kilkenny.

However, Brendan Molloy chair of CCE Baile na gCailleach said the group would “respect the due process set out by Comhaltas” in terms of hosting Fleadh Cheoil na hEireann.

Having contacted Mr Molloy, who is also chair of the County Derry Board of Comhaltas for a comment on the situation, the County Derry Post was referred to a statement released by him on the Facebook page of CCE Baile na gCailleach.

The statement said: “As of this afternoon (Tuesday, November 19), we have been made aware that there is some information circulating regarding our branch, CCE Baile na gCailleach, bidding to host Fleadh Cheoil na hEireann 2022-2023.

“We are indeed in the process of submitting a bid for submission to the Ulster Council of CCE, however, this is still a highly sensitive time for us a branch because it is not yet confirmed if there will be other bids from the province going forward and we also wish to respect the fact that Mullingar should be enjoying their time in the limelight as hosts for 2020.”

In recent weeks however it was confirmed that Armagh is considering a bid to host the premiere event in traditional Irish music, song and dance. That news emerged after a Sinn Fein proposal at Armagh, Banbridge and Craigavon Council was backed with the support of representatives of the SDLP, UUP and Alliance Party at the October meeting of the local authority.

The proposal placed before that Council said they should engage with “all relevant stakeholders with the aim of working on a submission to bring the All-Ireland Fleadh Cheoil to the ancient city of Armagh in the year 2022 or next available year thereafter.”

Mr Molloy continued: “We had hoped for this news to be made public by ourselves at a slightly later stage because we presently must focus on delivering a wonderful Fleadh Cheoil Dhoire in May next year.

“We are delighted to say that we have been working with representatives from Derry City and Strabane District Council and all political parties locally over the past 18 months and hope, when the time comes, we will be able to appeal for the whole city to get behind us in our bid.

“For now, we will continue to work hard, respect the due process set out by Comhaltas and update the public formally on our endeavours when the time is appropriate to do so.”