McCann recently turned up at the Abbey Arts Centre in Ballyshannon to deliver the keynote Allingham lecture to kickstart this year’s festival of the same name. His theme - ‘Power and the People’. 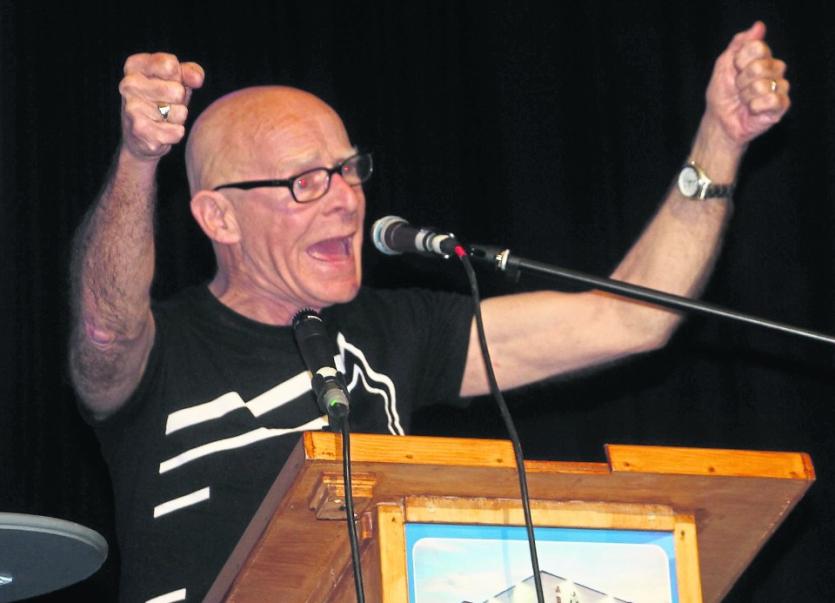 Eamonn McCann addressing the audience at the Abbey Centre in Ballyshannon.

It’s hard to picture it, but more than 50 years ago lifelong Derry activist Eamonn McCann was working in London as a tree pruner.
It seems a world away from the McCann we know, or think we know - the black leather jacket, white t-shirt, blue denims and trade mark black shoes, hands dancing as he makes his point.
McCann recently turned up at the Abbey Arts Centre in Ballyshannon to deliver the keynote Allingham lecture to kickstart this year’s festival of the same name. His theme - ‘Power and the People’.
He was to get the early bus from Derry, have dinner with committee members. But he arrived with friends by car and side-stepped the dinner for a cup of tea and a quick chat as he gathered his thoughts.
Sitting in the plush red seats of the centre’s magnificent Rory Gallagher Theatre, McCann’s pool-cue smooth head was the only hint that he might be anything near 76 years of age.
He looks a lot younger than that, how young changes with his facial expressions.
After a fascinating, unscripted 40-minute mean- der through the rooms of his life, bullet points jotted down in a copybook left unopened at the podium, he took questions from an audience of circa 180 people.
They heard him speak movingly about Bloody Sunday at first. He moved on swiftly through a stack of thoughts, events, names, countries, street corners, ideas, ideologies.
He brought us to Lebanon, describing it as “a beautiful jigsaw about to explode”, then to Basra, stories of people of all religions on the streets marching for bread, demanding equal rights, “same as we all marched for, for civil rights, for human dignity,” he said as he opened a second bottle of water.
He paused and changed pace to tell us how the families of the children featured in the magnificent book”Children of the Troubles” written by Freya McClements and Joe Duffy, thanked the authors for what they had done, putting their loved ones who had died so needlessly, tragically within the pages of that book.
He stayed on this theme. He spoke powerfully, hands gyrating, as he took refuge from the the theatre lights, the peaks of his voice popping the hand held microphone, then dropping down to an almost hushed tone.
He told us about Strabane’s “Charles Love,” known to some as Cha, referred to in reports as “Charlie.”
We heard how Charlie died tragically on Sunday, January 28th, 1990, while attending the 18th Bloody Sunday commemoration in Derry's Bogside.
He was fatally injured when debris from an explosion intended for the security forces struck him on the head.
The IRA planted the bomb in the City Walls hoping to target British soldiers or RUC personnel using the location as a vantage point for the parade.
McCann asked why would the IRA knowingly plant a bomb at a Bloody Sunday commemoration parade. The outcome, he said, with so many people attending, was inevitable.
He said last night that the decision to plant the bomb was “the Provos” sending a message to the people: “March all you like, but we (the Provos) will give you freedom”.
As he approached 40 minutes crammed with thousands of words, he neatly threaded it all together, his own earlier quip about offering us some random thoughts now unveiled as an imposter, nothing random here, a brilliant presentation, whether you agreed or not with a word he said.
For him it was about people coming together to protest, to say no, to be as one. He recalled bring welcomed on The Shankill on a protest march that saw people walk together from there to The Falls Road in Belfast.
He repeated a point he made in an interview published in 2018 by The Irish Times where he said: “Look at the success of the civil rights movement, all the progress that has been made.
“That was achieved by people on the streets,” he said.
That’s how he sees “Power and the People’ working.”