Group on a three-day trade mission to US 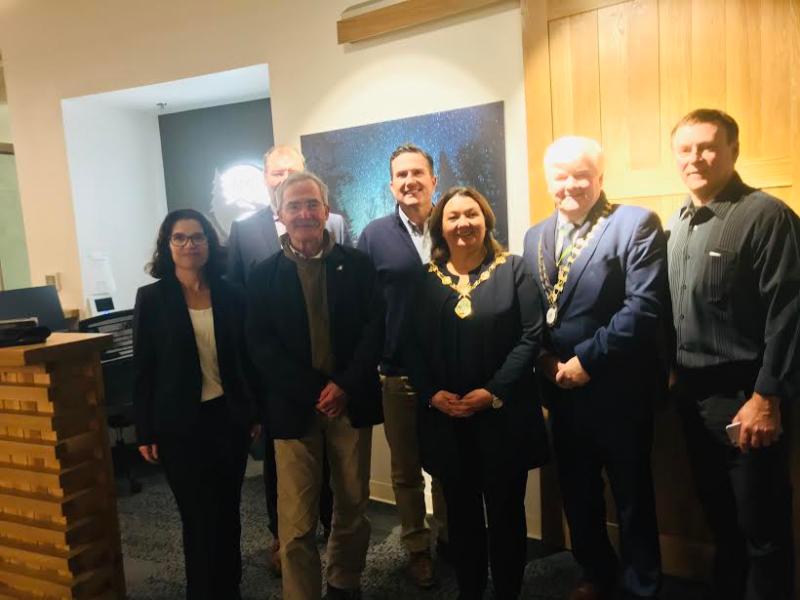 Mayor with officials from the Appalachian Mountain Club.

The full delegation is made up of civic leaders, officials and education institutions from the Derry City and Strabane District Council and Donegal County Council areas who are in the United States to explore opportunities for business and educational partnerships.

The Ulster Ireland International Appalachian Trail is one of 18 chapters which share a common geological heritage, the Appalachian-Caledonian Mountains, which formed more than 250 nillion years ago during the Paleozoic Era, when the earth’s plates collided to form the supercontinent Pangea.

The Ulster Ireland section of the trail measures a distance of 302 Miles (485KM).

It starts at the spectacular Slieve League cliffs in Co Donegal, crosses into County Tyrone where it picks up the Ulster Way and takes in the scenic Sperrins the stunning North Coast and the Glens of Antrim.

Development and promotion of the route is supported by a wide range of stake holders including Derry City and Strabane District Council and Donegal County Council.

Derry City and Strabane District Council is currently leading on a Rural Development Programme EU funded co-operation project which will see investment in route infrastructure as well as the delivery of a significant programme of marketing and promotion.

At the meeting in Boston today, Mayor of Derry City and Strabane District Council, Cllr Michaela Boyle, outlined Council’s ongoing commitment to the development of the IAT.

“We very much share the IAT’s goal to connect people and places by establishing through our shared geology and natural heritage a network of walking trails that extend beyond borders to all geographical regions once connected by the Appalachian Caledonian Mountains,” she said.

“The development of the route locally is a key action within the Derry City and Strabane District Tourism Strategy and its delivery and promotion will be instrumental in achieving positive and sustainable tourism benefits for the region. “The recent award of funding for the project from the EU’s Rural Development Co-Operation programme and local partner council represents for us an important milestone for the IAT Ulster Ireland.

“It will enable us over the coming months to create  a high quality walking experience  which we are confident will put us on the map as must visit walking destination.”

While the Applachian Mountains are traditionally associated with North America and specifically the eastern United States and Canada, its geology can be found also in Greenland, Scandinavia, the British Isles and Europe and North Africa.

The International Appalachian Trail running from the US to Canada was first developed in 1994 on the basis of this geology, and has since been extended throughout the world with Ulster Ireland joining in 2013.

Its ultimate mission is to establish a network of walking trails that extends beyond borders of all  the  geographic regions which share the Appalachian footprint with the aim of connecting places and people, promoting  natural and cultural heritage, health and fitness, environmental stewardship, cross-border cooperation, and rural economic development through eco and geo tourism.

The meeting was one of a series of meetings and engagements organised by the delegation who are in the US this week as part of a trade and investment mission.

The delegation led by Derry City and Strabane District Council and Donegal County Council, includes representatives from third level and further education providers and development organisations and eight companies from across the region who are looking at opportunities to expand into the US market.

The trade mission takes is taking place until tomorrow with funding being provided by The Executive Office and the Irish Government.