Vitalwork on pavements and green areas in a number of Maghera housing areas is to take place, the Department of Infrastructure (DfI) has confirmed. 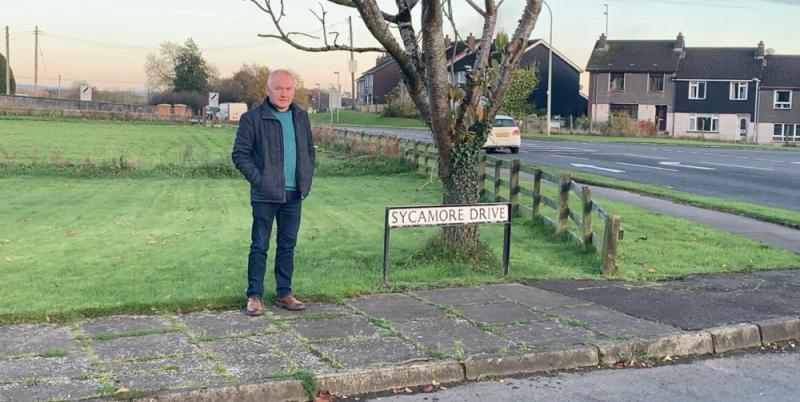 Carntogher representative Brian McGuigan at the entrance to Sycamore Drive, Maghera where much needed DfI work is to take place.

Vitalwork on pavements and green areas in a number of Maghera housing areas is to take place, the Department of Infrastructure (DfI) has confirmed.
Beaver Cresent and Sycamore Drive are two of the areas to benefit from the maintenance after residents issues were raised to the department by a local councillor.
Brian McGuigan, Sinn Fein representative for the Carntogher, highlighted concerns surrounding slippy paths, 'missing' sections of pavements and lighting issues in the area.
The work is expected to begin soon and should be in place before the complete onset of the winter season.
Confirming the news, Cllr McGuigan said: “I have been contacted by local residents of both Sycamore Drive and Beaver Crescent with concerns about safety on footpaths, particularly now with the approach of winter weather.
“As time has passed, issues have arisen with a slippy moss developing on the pavements outside the homes in Beaver Cresent, forcing residents to walk on the road as opposed to the footpath, for fear of falls and incurring injuries.
“Similarly, the uneven slabs and growth of moss at Sycamore Drive has led to the same problems, removing a safe option for pedestrians.
“I had spoken to Roads Service on several occasions about this issue and they have agreed that the pavements in both estates require renewal, but regrettably this will take a bit of time to deliver. “Similarly, I took the opportunity at the recent DEA meeting to raise with them again the issue of the 'missing link' as it is now known, the part of the road between Crew Road and Station Road that is without a pavement.
“I have been flagging this issue with the roads department for a number of years now, as it poses a significant threat to safety for walkers in this area and is a barrier to a walking route that would otherwise be heavily used,” he said.
“I am hopeful now that an alternative solution through further development in the area looks likely.
“However, I am delighted with the news that DfI Roads have now acquired a machine which will clean the moss of the pavements in the short term, resolving the issue for now.”
Cllr McGuigan said street lighting was also posing a “safety issue” for residents in the Sycamore Drive area.
He said: “Poor street lighting is a barrier to personal safety in terms of walking in the evening, and it also poses a security risk, in that unlit streets can be an invitation to criminals.
“I welcome this work from DfI Roads, and thank them for their commitment to progress.
“These small changes will make a big difference to the residents of both estates, and in these modern times when we are encouraging people to look after health and wellbeing by walking for leisure, it is important that we create a safe environment to do so.”
He added: “With the soon to be initiated Public Realm Scheme in Maghera, and the newly developed Largantogher Walkway, I want to see as many town dwellers as possible out and about, utilising these council facilities, and so it is vital that they are able to safely leave their homes- especially in the frosty winter evenings!”