Millions tune in to learn about TV star's Desertmartin heritage

MILLIONS of viewers in the UK tuned in to Ant and Dec's DNA Journey on ITV, as the pair paid a visit to Desertmartin and Slieve Gallion. 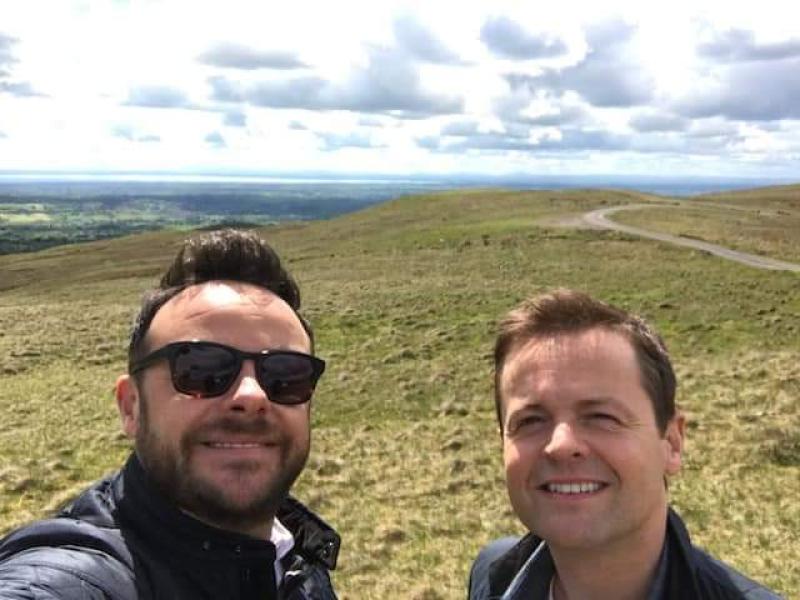 Ant and Dec take a selfie on Slieve Gallion.

MILLIONS of viewers in the UK tuned in to Ant and Dec's DNA Journey on ITV, as the pair paid a visit to Desertmartin and Slieve Gallion.
The two-part documentary followed Britain's Got Talent hosts Ant McPartlin and Declan Donnelly as they traced their ancestry. In Sunday night's episode Ant found out that he is related to “half of a village” while Dec explored his family's roots in Co Derry.
Declan's father Alphonsus ‘Phonsie’ Donnelly and mother Anne Donnelly are originally from Desertmartin, as was Dec's great-great-grandfather James Donnelly (1827 -1891).
During the show, a historian informed Dec that James Donnelly fought in the Crimean War (1853-1856), a conflict between the British, French and Ottoman Empire against the Russian Empire. He revealed that James was tried three times by court-martial and deserted the army six weeks after signing up. He also served time in prison for 'habitual drunkenness.'
James was eventually discharged due to an eye injury and returned home to Co Derry to raise a family.
Later in the show, Ant discovered that he is related to a large number of people in Drumkeeran, Co Leitrim. Ant's relative Mary McPartlan sang Slieve Gallion Braes during his visit, prompting an emotional Dec to reveal that the song was sung at his father's funeral.
Ant and Dec then travelled to the Desertmartin area as family historian Brad Argent took the pair to an old cemetery on the Kilcronaghan Road. Brad informed Dec that his great-great-grandfather James had been baptised in the now ruined church and he also revealed some more information about his time in the army.
“He signed up on Christmas Eve 1846 and what he probably did – because it's what many, many Irish did when they signed up, they got their sign on bonus, they got their uniform, they got their gun and then they went home and they sold them,” Brad said.
“They took their signing bonus and give it to their family, who were struggling. And then he rocks back up and faces the punishment, as a 19-year-old kid.”
Brad also looked into the list of people buried in the graveyard and directed Ant and Dec to the grave of Dec's great-great-great grandfather John Donnelly (1799-1872), as well as his great-great-great-great grandparents John (1755-1839) and Mary (died 1848).
The pair then travelled to the top of Slieve Gallion, where they listened to Slieve Gallion Braes before leaving Ireland.