Geraldine's cakes are out of this world 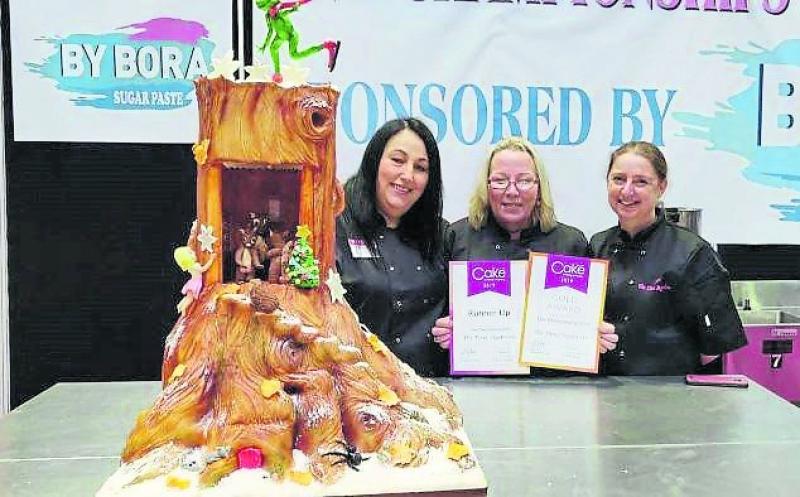 A talented Eglinton baker has scooped a gold award at the world's biggest cake competition
Geraldine Lindsay, of MySugarFairy Cakes, is well known in the city for her elaborate creations. Once a year, she competes at Cake International, which took place at the NEC in Birmingham earlier this month.
She met with her “The Three Sugartiers” team mates. Maria Ditch of Delissima Cakes in Retford and Julie Rogerson of Julie's Cake in a Box of East Yorkshire on the competitive baking scene.
"I love sugarcraft and I'm passionate about it, said Geraldine.
"I put as many hours into it as I possibly can.
"I attend and compete as well as competing with individual pieces."
Their challenge was this year to create a showstopper cake with the theme “'”Winter Celebrations Around the World.”
"We decided on a New Year celebration as this is celebrated by most people around the world and a woodland theme with small animals doing different things all representing winter," she said.
The team worked for 11 hours to create a stunning New Year's Eve woodland party, which was runner-up in the competition and received a gold award from the judges.
"We carved the tree's roots out of cake and little hollows were created, which we filled with edible creatures including mice and an owl," said Geraldine.
"We used soundbites to support a story for the cake.
"There's a red door in the tree's roots, where Mr Hedgehog lives, he likes to hibernate over winter but wakes to attend the party; he can be heard snoring, then his alarm sounds and he is heard washing, before closing the red door, then you hear his footsteps crunching in the snow as he walks up the wooden steps around the tree, on his way up to join the New Year's Eve party."
Their winning design pushed extreme cake boundaries and Geraldine had to stand on a chair to reach the top.
"You can see inside the hollow trunk, as squirrels dance in the lounge, there's a Welsh dresser, mirror and a cosy fire, as well as streamers hanging from the ceiling and a Christmas tree at the entrance," she explained.
"An ice-skating frog stands on a frozen pond on top of the tree stump, his scarf flying out behind him as he whizzes around. He was tricky to create, so I was absolutely thrilled when the judges described Francis the Frog as an 'excellent skating frog'.”
Geraldine says the feedback on their festive creation made all their hours of work worthwhile.
"We welcomed lots of questions from members of the public, and it was really wonderful when local people actually made the trip to support us over the weekend. So many people said they felt inspired to start cake decorating by our work.
"We were runners-up in the competition, but being awarded a gold award for our work was absolutely incred- ible, because we know how high the standard needs to be in order to get a one. I have won gold, ailver and Merit awards previously at Cake International for individual work, but this is the first time I've been given gold for work carried out with other sugarcraft artists.
"I greatly appreciate the support of others, particularly of my family, my customers and of the people in the North West, as well as from further afield who support my business and encourage me. I have been very lucky to have been commissioned to make some extraordinary cakes over the last few years and thoroughly enjoy building unusual cakes."