A delegation of elected representatives from across Europe visited Derry and the North West region over the weekend as part of a GUE/NGL initiative. 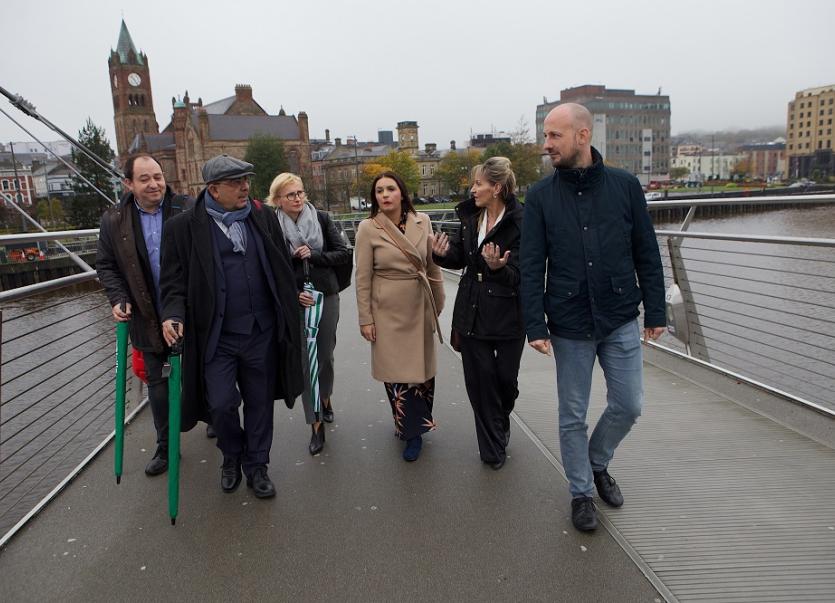 A delegation of elected representatives from across Europe visited Derry and the North West region over the weekend as part of a GUE/NGL initiative.
The delegation, hosted by Sinn Fein MEP Martina Anderson, met with key stakeholders and the community to hear their concerns about Brexit.
The representatives in attendance were Pernando Barrena MEP, EH Bildu, Basque Country, Kateřina Konečná MEP, Komunistická strana Čech a Moravy, Czech Republic, Marc Botenga MEP, Parti du Travail de Belgique / Partij van de Arbeid van België, Belgium, Niyazi Kizilyirek MEP, AKEL Cyprus and former Foreign Affairs Minister, George Katrougulos, MP of the Hellenic Parliament- Syriza, Greece.
Speaking the delegation's visit, Ms Anderson said: “This important visit afforded the opportunity for many engagements that allowed the visiting representatives to get a real sense of the damage that Brexit will do to the North West region.
“Speaking to both chief executives of the Derry City and Strabane District Council and the Donegal County Council, the delegates were given an insight into the unique cross border working relationship and how any form of Brexit could impact on this.
“Representatives from the business sector and the community and voluntary sector had the opportunity to meet with the MEPs and put across how vital EU funding has been for them, and how the loss of it will hit Derry hard.
“All spoke about no hardening of the border and protecting the Good Friday Agreement. Whilst on the border at Strabane/Lifford, it was clear to see through a demon- stration by Border Communities against Brexit (BCAB) that there can be no hardening of the border in Ireland
“All agree that there is no good Brexit for the North.
There was a great attended public meeting in the Guildhall that gave people the opportunity to hear from speakers and MEPs who will be fighting our corner in Europe.
“Discussions centred on the need to plan and prepare for constitutional change in Ireland.”
Ms Anderson concluded: “On behalf of the people of Derry and Donegal I thank the representatives for coming to the North West and I want to take this opportunity to thank all who engaged and who are rejecting Brexit in all of its parts.”