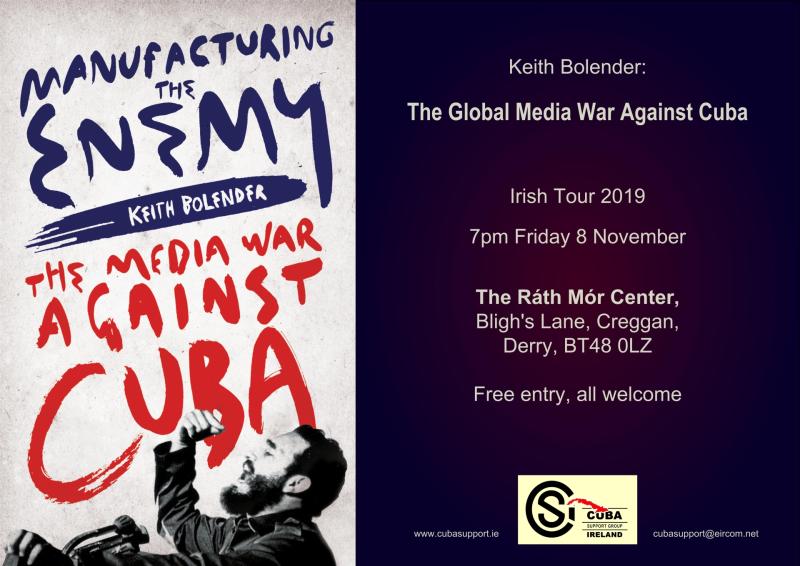 A Canadian author and journalist will address a public meeting in Derry tomorrow to speak about his new book which examines the negative view of Cuba presented by the media.
Manufacturing the Enemy: The Media War on Cuba, was written by, Keith Bolender, who has spent many years studying and documenting the ongoing efforts of the United States to undermine the Cuban state.
He believes that the mainstream media, both in the US and in the political West generally, has presented an overwhelmingly negative view of the Cuban Revolution.
Even in Ireland this bias is clearly evident, up to and including the recent visit of Cuban President Miguel Diaz Canel which was not covered at all by RTE news or current affairs
The meeting is being hosted by the Cuba Support Group which was established in 1993 to campaign against the US economic blockade of Cuba and for better relations between Ireland and Cuba.
Cuba Support Group member John Bowen, who recently met the Cuban President in Dublin has said Ireland should become more critical of the United States’ Cuban policy and the Irish mainstream media should not unquestioningly carry US propaganda against Cuba.
“For 60 years the United States has carried out a ruthless campaign against socialist Cuba which has ranged from attempted invasion and assassinations to the blockade of food, medicine and technology from entering Cuba.
“This has been supplemented with a campaign of misinformation, myths and outright lies against the Cuban revolution and while we have come to expect this from the United States we should expect more from the mainstream media outside of the US, including Ireland,” said John Bowen.
The meeting will be held in the Ráth Mór Centre, Creggan, on Friday 8th November starting at 7pm. Entry is free. All are welcome.