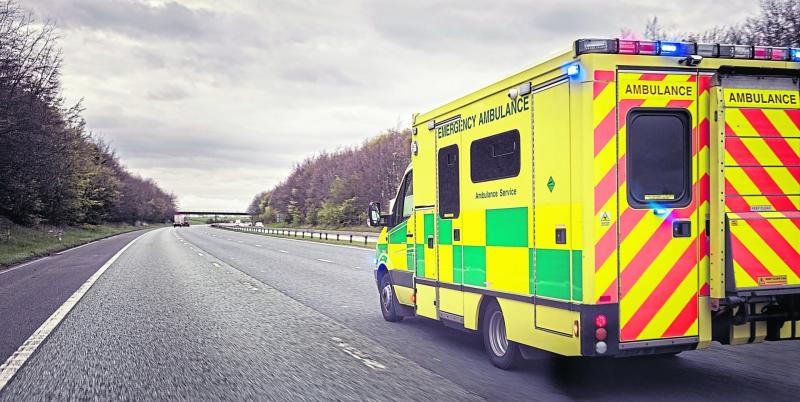 RURAL areas in County Derry are being hardest hit by the current health crisis described as being at “breaking point” by a Westminster committee.
Patients waiting on surgery, care packages and even cancer treatment are facing huge delays with an MLA warning the only way to stop a health service collapse is for immediate government investment.
SDLP Assembly member Patsy McGlone said his Mid Ulster office has seen a huge rise in the number of concerns over care in the area.
That includes the availability of ambulances and lack of staff working in health clinics and hospitals serving the County Derry area.
“Traditionally, this time of year the demand on health services starts to build, but what is different this time is that we have seen an increase in the number of constituents who are coming to us over hospital admissions," Mr McGlone said yesterday.
“People waiting for surgery, for a consultant appointment, I even had someone with me recently waiting on cancer treatment.
“There is also an issue in the area over the availability of ambulances.
“There is no doubt about it, the health system is under pressure, both locally and wider afield.
“It is a resource issue - we need more staff, more consultants, more doctors and more nurses.
“And those working in our health care system left coping with the huge demand are feeling the pressure.
“We need to invest in more staff and we need to do it now.”
The politician's comments were echoed by Causeway Coast and Glens Borough representative Helena Dallat O'Driscoll who said rural communities faced a “care postcode lottery”.
“Our elderly and disabled people and their families in rural areas are being let down when they are at their most vulnerable," she said.
“This is an awful indictment on the two parties that are refusing to provide us with a Minister for Health to alleviate the situation."

Causeway Coast and Glens councilor Helena Dallat O'Driscoll said she had been contacted by an increasing number of constituents from rural areas regarding the availability or adequacy of packages of care.
She added: “Some constituents have been assessed fit to be discharged from hospital provided that a domiciliary care package is in place.
"The money is there for it but there are frequently no staff to deliver it.
"As a result, some people have had to go into a nursing home, when they would do much better in their own surroundings.
"Others, are languishing at home with partial packages and as the weeks drag on this is putting a huge emotional, and sometimes physical strain, on their families.
“Care delivered in the home is the preferred form of care for most older people, especially couples, and it allows them to live with dignity and respect.
"There are mental, as well as physical, benefits to be reaped looking after someone in the familiarity or their home rather than being unnecessarily kept in hospital or a nursing home.
“I have written to Richard Pengelly, Permanent Secretary for the Department for Health outlining my concerns for our rural constituents.”
Her comments come straight after an alarming report by the Northern Ireland Affairs Committee which found services throughout the province 'deteriorating to the point of collapse' without a long-term funding strategy.
MPs on the committee said medics are struggling to meet the needs of an ageing population without proper financial support.
Chair Simon Hoare said: "The stark reality is that the Northern Ireland health service is falling behind the rest of the UK.
"An approach to funding that simply keeps things ticking over, and an absence of over-arching strategy in key areas, has left services at breaking point and this situation must end as soon as possible."
The committee's report found that key services specialisms like cancer, social care and mental health lacked comprehensive strategies to guide their future direction.
It said the department must do more to demonstrate its commitment to developing long-term strategies for these services.
The Committee found that it must also take immediate action to tackle acute issues facing the health service, including cancer waiting times, shortages in social care staffing and inadequate mental health funding.
Mr Hoare added: "Health services need the funding and long-term security necessary to allow them to transform and innovate, to truly address the short and long term pressures they will face.
"We have called for the Government to end the insecurity and set three-year minimum budget allocations to give vital services the space to breathe and look ahead.
"We also expect more regular updates on the progress in developing strategies in key areas, particularly cancer services and mental health."
He said the UK Government must also accept that, while decisions over the direction of Northern Ireland health services should be taken by the Stormont Executive, delay is no longer an option.
"Should Stormont not form this year, they must take action in the interim otherwise vital services will only deteriorate further."
A Department of Health spokesman said: "The department welcomes the publication of the report by the NI Affairs Committee and will carefully consider its recommendations."
A UK Government spokesperson said: "Health and social care services in Northern Ireland is a devolved matter. Since coming to office earlier this year, the Secretary of State has visited a number of health and social care facilities and he fully understands the pressures that the sectors are facing.
"That is why he is doing everything he can to get the Stormont institutions back up and running as soon as possible, in order that local politicians make decisions affecting everyone in Northern Ireland.
"The Secretary of State will consider the recommendations contained in the report and respond in due course."