March 29 came and went, October 31 the same, then, on Monday past, British Prime Minister Boris Johnston accepted Friday, January 31, 2020, as the day Britain would, maybe, finally leave the EU. 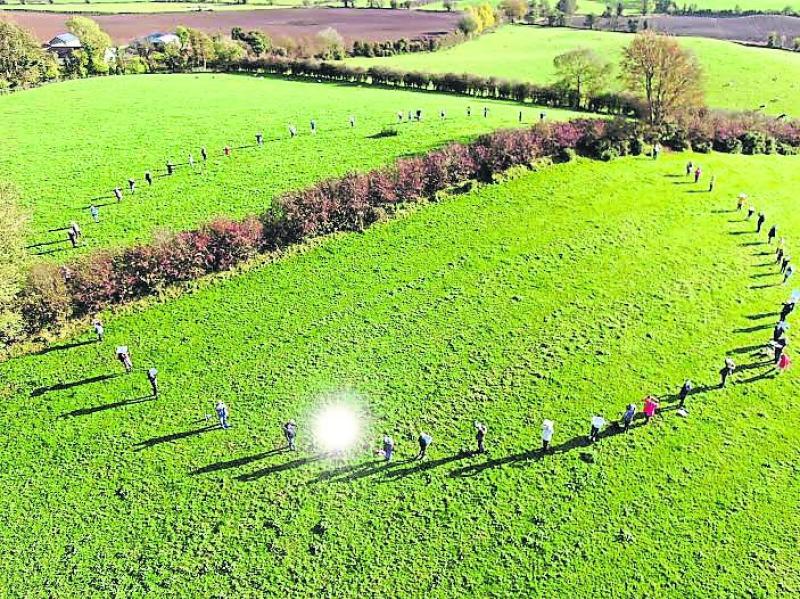 A week really is a long time in politics.
British Prime Minister Harold Wilson's oft-quoted aphorism proved true once again this week, with the EU granting Britain yet another Brextension.
March 29 came and went, October 31 the same, then, on Monday past, British Prime Minister Boris Johnston accepted Friday, January 31, 2020, as the day Britain would, maybe, finally leave the EU.
Undeterred by the interminable political machinations, multi- disciplinary artist, Duncan McKellar, on Simdau ;ast staged his “Giant Artwork Against Hard Borders” fields adjacent to Killea's Church of the Immaculate Conception.
Speaking before the event, Mr McKellar said he was “very happy” with the support from the gathering local communities. He had plotted out a 100-metre-wide circle in two fields taking in both sides of the border with participants standing beside little bamboo markers he had placed in the ground.
“It is at the same time, a protest against hard borders and a celebration of the communities around the hard borders.
“Hopefully, we will end up with some nice video from the drone and some nice photographs,” he said.
Mr McKellar arrived in Killea 10 days before the “Giant Artwork” took place and said the local “engagement” had been “fantastic.”
He said: “People are enthused by the novelty of the idea. There is a palpable warmth. The Irish stereotype holds up very well.
“I have been getting lots of help and lots of advice. People have been bending over backwards to help. Just this morning, I've laid sawdust at the entrance of the field to cover up the mud and Míċeál, who runs the timber merchants, took it round on a truck and said, 'Anything I can do just let me know'.”
Introducing himself to the assembled crowd, Mr McKellar explained his work often used mirrors and often took place in border communities. He said: “Last year, I managed to organise a long line which stretched for 1 kilometre on each side of the US / Mexico border.
“We also had a huge group of people on the White Cliffs on March 30, the day Brexit was originally meant to happen.
“We sent a giant SOS call to mainland Europe with our mirrors.
“With the focus turning to the Northern Ireland border, I thought it was an appropriate time to come here. We are going to form a big circle, to symbolise the strength within the community here and also to show the strength of feeling against hard borders because obviously it used to be right there, the checkpoint.
“We will walk to the brow of the hill. The border itself is the Liberty Burn at the bottom of the field. The sun will hit the mirrors and, as well as adding a bit of fairy dust to the images and drone footage, they symbolise the human spirit,” said Duncan.
Patrick O'Donnell who owns a garage in Killea said he got involved in Duncan's 'Giant Artwork Against Hard Borders' to support the artist.
Patrick said: “I came along this morning to support Duncan and to protest against Brexit. The artistic aspect of the protest appealed to me.
“The idea of hands across the border appealed to me. We don't want a hard border again, we don't want a border at all, basically.
“As a business person, I think a hard border would be a disaster, a disaster totally,” said Patrick.
The next thing Duncan has in the pipeline is maybe an installation in Palestine.