A LIMAVADY mum who lost her baby daughter to a fatal birth defect has described the life-changing support provided to her by a baby loss group. 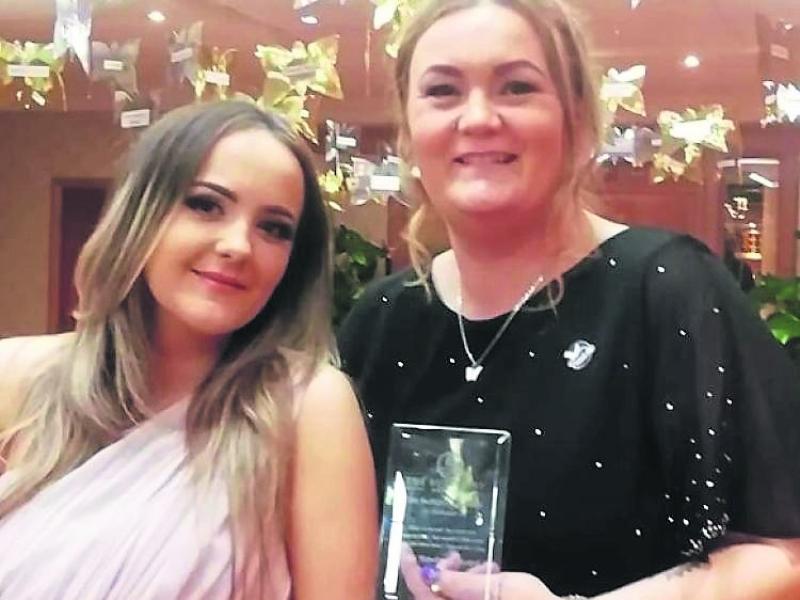 A Limavady mum who lost her baby daughter to a fatal birth defect has described the life-changing support provided to her by a baby loss group.
Erin O'Hara, whose little girl Freya passed away minutes after being born in December 2018, said she does not know how she would have coped without the help of Every Life Counts.
The 24 year-old mum got in touch with the Irish charity after being given the devastating news during a 20 week pregnancy scan that her baby had anencephaly – a life limiting condition where the brain and bones of the skull do not form properly.
The Co Derry woman was then contacted by support worker Vicky Wall, who helped the young mum through the devastating diagnosis and her decision to carry her daughter to full term.
And Vicky, from Waterford, was even there by Erin's side when she spent her final moments with little Freya who lived for just a few minutes.
Last week at the annual Butterfly Awards, Vicky received a prestigious accolade for the exceptional support she gave to Erin and other families during heart-breaking loss.
She was named as recipient of the 2019 Thank You award after being put forward for the award by Erin.
In a heart-touching statement read by the judges at the UK ceremony earlier this month, Erin described the difference Vicky made in her life, and the tragically short life of her daughter.
Erin wrote: "In December past, I had my beautiful little girl Freya, who sadly passed away in my arms just minutes after she was born. Her daddy and I knew she was going to pass away, but that didn’t make it any easier for us. We found out at our 20 week scan that she had anencephaly, and our lives haven’t been the same since. We have become brand new people, forced to grow up that little bit quicker, into a society which sometimes seems absolutely clueless about baby loss."
"Freya’s journey was an emotional rollercoaster from start to finish, and there were good days, and there were bad days, but no matter what kind of day it was, significant or not, there was one woman who was always there for me. Vicky Wall.
"Any time I’ve needed someone to talk to, Vicky has been at the other end of the phone, no matter when, no matter why. On the days in which I have doubted myself, Vicky restored my faith in myself.
"She reassured me, that I could do what I set out to do. But most importantly, she prepared me to be able to bring my daughter into this world in a gentle, loving, compassionate way. For that, I will never forget her," she wrote.
"Every Life Counts are dedicated to providing desperate families with much needed perinatal hospice care and support. They've not only helped us along the way, but have actually played a huge role in our daughter's story," Erin added.
"I can always count on a message from Every Life Counts, even if it just says 'How are you today darling?'
"And as much as those messages mean to me, they are little in comparison to the rest of what they have done for us.
"For instance, in November, my partner and I decided to throw a baby shower, and instead of buying presents, we asked for a small donation for charity from everyone who came.
"What I couldn’t believe was that the team from Every Life Counts travelled all the way up from Waterford to Northern Ireland (where I live) to attend our special evening.
"That’s over six hours of travelling. And they brought a professional photographer who took amazing photos and a very special video of my partner and I, talking about the evening and about how our journey had been going so far. Vicky gave me a very special Minnie Mouse teddy bear, which sat in my daughter's Moses basket with her during her time with us. I now have that teddy to treasure for the rest of my life, in memory of her," she explained.
Erin revealed that when she was in hospital around the time of Erin's birth, Vicky travelled again to support and advocate for the family. "They made the effort to be there for us, during the best and worst time of our lives," said the Limavady mum.
"It proved how special our little girl was to them, how special all the little babies are to them. Before I was put in touch with Every Life Counts, I didn’t even know what perinatal hospice was, and now, I don’t know what I’d have done without it. Thank you," she said.
Vicky, who tragcially lost her baby daughter Líadán to a life-limiting condition, said the best award of all was knowing that her work made such a tragic loss a little more bearable for families.
"When my baby died, part of me wanted to go into the grave with her," she said. "It's a harrowing and desperately lonely place to be, and we want to say to parents that we understand and we are here for them, and we'll work to make things better and to bring love and joy while recognising the loss and sorrow," she said. "This award is for all the beautiful and brave families in Every Life Counts who will always love their babies to the moon and back."