Seamus raises over £34,000 for ward staff who saved his life

A man who received lifesaving treatment at Altnagelvin Area Hospital has raised a staggering £34,080 for the ward he received care in. 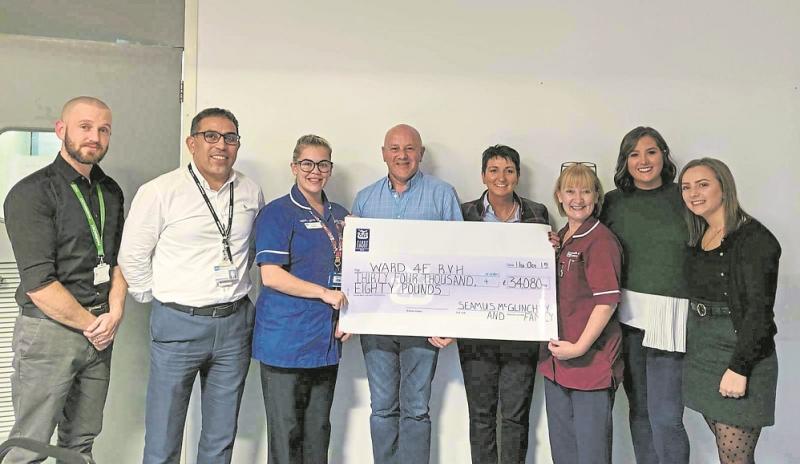 Seamus Mc Glinchey, who suffered a brain haemorrhage in October 2016, presents a cheque for over £34,000 to staff in Altnagelvin's 4F ward where he received lifesaving care.

A MAN who received lifesaving treatment at Altnagelvin Area Hospital has raised a staggering £34,080 for the ward he received care in.
Seamus Mc Glinchey who suffered a brain haemorrhage in October 2016, promised staff in the 4F ward that whenever he got back to strength he would run a fundraiser in appreciation for their care.
Last month the Co Tyrone man, his wife Una and daughters, Camilla and Fionnuala, ran a very successful fundraiser night in the Glenavon Hotel, Cookstown.
The night consisted of a sit down meal, auction and raffle. Entertainment on the night was by 'The Swingtime Starlets' and Jim 'The King' Brown.
A cheque for the amazing sum of £34,080 was presented to the management and staff off 4F on October 11, three years to the day on from when the Kildress man had fallen seriously ill.
Seamus would like to thank all those in 4F, and also all those who supported the fundraiser in anyway. The family say they were overwhelmed by the support of local and far away people and businesses.