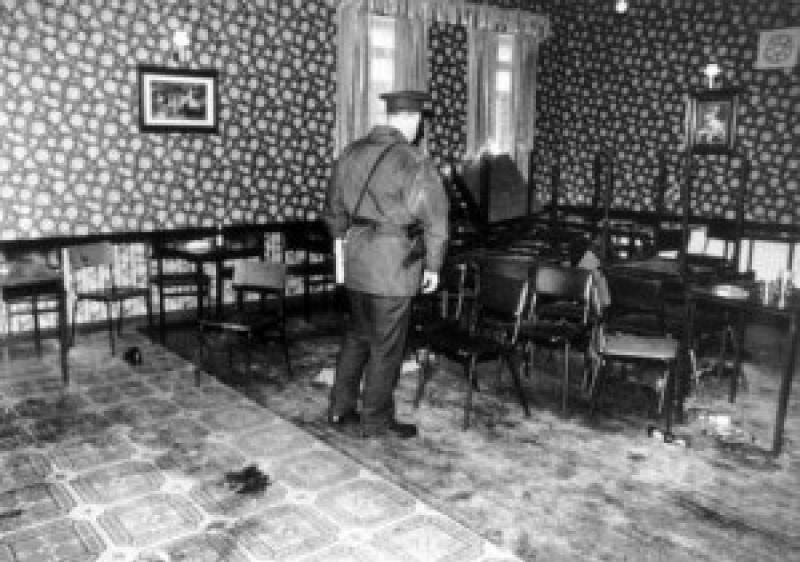 Eight people were murdered inside the Rising Sun bar, Greysteel by a UFF gang 26 years ago.

A ROGUE RUC officer in Co Derry helped UDA killer Torrens Knight move one of the deadly guns he used in the 1993 Greysteel 'Trick or Treat' massacre.
Information passed to an East Derry politician following the atrocity revealed how the policeman, stationed at Coleraine RUC Barracks, recovered the automatic rifle from a spot being searched by his colleagues weeks before the Rising Sun atrocity.
The loyalist sympathising constable - who was not believed to be working on Special Branch orders - was able to move the firearm - also used to gun down four men in Castlerock - after fishermen discovered the bag of UDA weapons on the banks of a Co Derry river.
Stunned by the find at Hunter's Mill, Aghadowey, the anglers left the area and reported what they found to SDLP man John Dallat.
Speaking to the County Derry Post ahead of the Greysteel anniversary this week, Mr Dallat confirmed that he contacted police who carried out an almost instant search around the Agivey River.
However, they failed to locate the weapons because they scaled the wrong section of the bank.
The blunder allowed the corrupt constable to go the area himself, recover the two high powered firearms and hand them straight back into the hands of the killer UDA/UFF gang.
Then, just weeks later on October 30, Knight along with UFF killers Jeffrey Deeney and Stephen Irwin burst into the Rising Sun bar and murdered eight men and women.
As the killers sprayed the bar with bullets, Irwin shouted 'trick or treat'.
Mr Dallat says it is his belief the horrific atrocity could have been prevented.
"Those involved in the importation of arms and the transportation of them from a marina in Coleraine may not have known the consequences for their actions at the time but they surely know for many years how many lives they are responsible for, how much grief they caused and why they should come forward and tell their part in these atrocities.
“While vile people were arrested and served part of a judicial sentence, the complete picture has never been told and those behind the importation of those lethal weapons remain free but how can they live with their consciences?
"Guns are lethal weapons, they are designed to kill and that is what they did at Castlerock and Greysteel and other places and people covered up for them, moved the guns and at least one of the gang was never interviewed according to my information provided to me by people who were in a position to know but too scared to speak out.
Mr Dallat added: "What I was told by a former serving member of the Royal Irish Regiment (RIR) was this man was a rogue RUC officer stationed in Coleraine at the time.
"This RIR man had previously served in Coleraine himself and he was disillusioned with the time he spent there, he was at a stage where he felt he wasn't able to serve the purpose he joined it for.
"It was a number of issues he came to me with, separate to this information about this officer.
"Quite clearly if those guns had been recovered at that time it may have prevented Greysteel.
"One was high calibre and it was that gun that caused most of the damage.
"The find could have also led to the arrest of those who had control of the guns.
"In other words the gang might have been rounded up far earlier before multiple people were murdered."
The revelation will add to a long list of unanswered questions as relatives and survivors prepare gather for the 26th anniversary of the atrocity tomorrow.
That includes questions surrounding just how close security force personnell were to the killers at the time, including Torrens Knight, who is long suspected of being a paid police informant at the time, and after his release from jail.
Knight - now in his late 40s - was sentenced to 12 life sentences for the Rising Sun bar murders, and that of four Catholic workmen in Castlerock in March of the same year. Three of his UFF accomplices were also handed a number of life sentences for their part in Greysteel.
All were all released in 2000 under the terms of the Good Friday Agreement.
In 2007 the Police Ombudsman said detectives did not have information which could have prevented the 1993 murders of eight people in Greysteel.
SDLP assemblyman John Dallat had made a complaint, saying crucial information he gave to detectives was not acted on.
Nuala O'Loan also found there was no evidence killer Torrens Knight was protected from the rigours of the law.
Mr Dallat said the truth could lie in military files.
"There are tens of thousands of military files sitting in a warehouse somewhere in England that will lay bare the answers to the many unanswered questions surrounding Greysteel, Castlerock and many other atrocities," he said.
"I also believe that Torrens Knight, who masquerades around as a man who has found God, has much, more to tell.
"The campaign currently is to leave the past behind and move on, but not everyone can do that. The relatives of those murdered in Greysteel still suffer to this day."
The politician added: "Victims must be told the truth about what happened, how it happened and who was involved.
“The government have been economical with the truth, they conspired to work with some of the most dangerous people loose in the community at the time and sadly flags still fly in honour of the vile organisations that did the murders.
“That is not right, it is never right and only when the final chapter is written can many people draw a line in the sand and begin the process of a new dawn, a new beginning where respect for each other is not just empty words at a political conference but the motto that drives us day and daily as we seek to rebuild and build anew.”