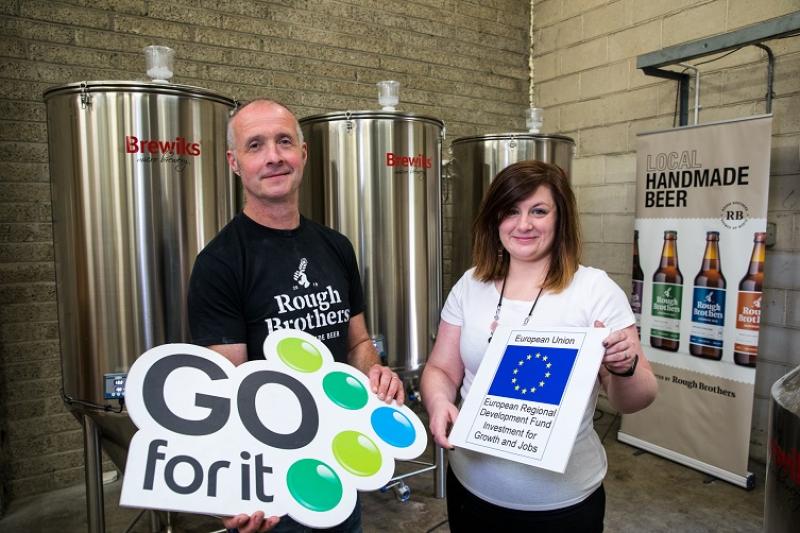 A craft beer expert with a passion for brewing his very own home-made ales has turned his dream of launching his very own range of beers into a reality thanks to the Go For It Programme, in association with Derry City and Strabane District Council.
The Go For It Programme is part funded by Invest Northern Ireland and the European Regional Development Fund under the Investment for Growth and Jobs Northern Ireland (2014-2020) programme.
Andrew Rough, originally from Yorkshire but now settled in Derry, has turned his passion for quality beer into a career after he discovered a gap in the market for locally produced, quality craft beers.
Originally from Yorkshire, Andrew moved to Derry where he met his wife and settled down. He soon discovered that the beer offering was limited compared with what he has been accustomed to in Yorkshire.
Andrew said, “As a Yorkshire man, I am used to a really wide selection of beers, ales and stouts. But when I moved to Northern Ireland, the selection was limited to what I had been accustomed. I really struggled to find something different to the common mass-produced brands.
“Over time, a few micro- breweries started to pop-up and that’s where the idea really started. I worked in the Walled City Brewery when it first opened. I loved seeing the process from grain to glass and I enjoyed seeing the look on people’s faces when they tasted something a little different to the usual offerings.
Rough Brothers Brewing boasts an offering of five distinct products using only the finest, locally sourced grain in its brewing process.
This includes an Oatmeal Stout, Northern Pale Ale and a bespoke beer, brewed exclusively for a local Asian street food inspired restaurant.
Following the decision to open his own micro- brewery, Andrew knew what his business would offer, but lacked the business knowledge needed to put the idea into motion. 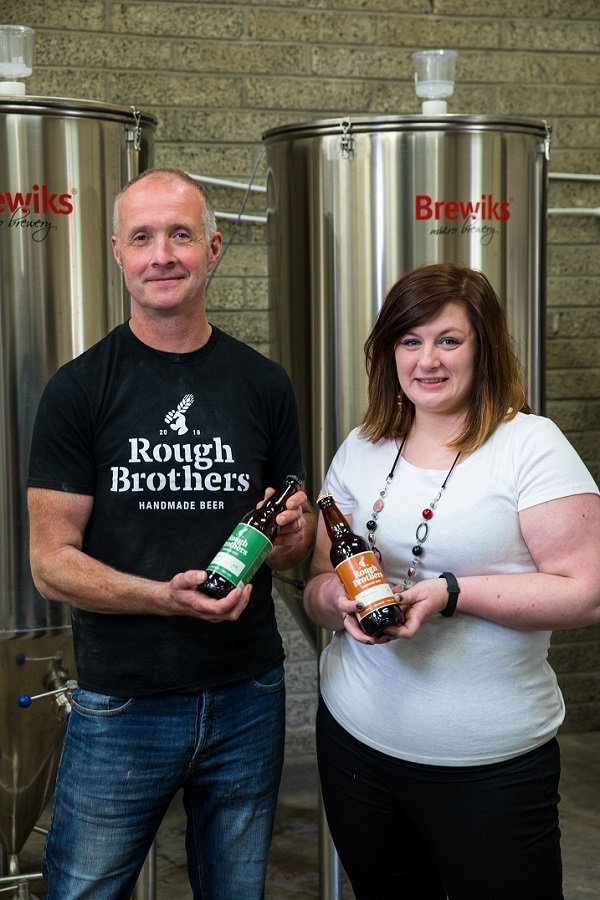 That’s when he contacted the Go For It Programme to seek the professional support he needed to develop a detailed business plan to assist with turning his business idea into a reality.
“I got to a stage when I knew that I wanted to go out on my own and put my twist on the newly revived micro-brewing industry, which was starting to really come into its own. I had an idea of what I wanted my business to look like and the types of products I would produce, but when it came to putting it together into a business, that’s where I needed help and contacted the Go For It Programme.”
“I filled in the Go For It Programme online enquiry form and got speaking to my business advisor at Enterprise North West the next day. It was really quick and easy.
“I knew what I wanted the business to look like, but I needed advice when it came to the legalities surrounding alcohol production, health and safety and insurance. The advice and support I received was fantastic. Everything was really clear and really helped me to take the next steps to realising my business dreams.
“We developed a clear strategy for growth, which included opportunities I hadn’t even considered like the bespoke brewing offering which now makes up almost half of my business. The process of writing the business plan was fantastic. It really helped to cement the business idea and outlined clear goals, financial and otherwise, for the future.”
The Go For It programme is delivered free of charge by a team of experienced business mentors through Northern Ireland’s wide network of enterprise agencies. It provides expert advice and help with developing a robust business plan to help turn ideas into a commercial enterprise.
Claire Costello, business adviser, Enterprise North West for Derry City and Strabane District Council, said: “Supporting Andrew during the start-up stage of his business was a pleasure. He had a really vibrant and exciting business idea, which we helped him to fine-tune into a viable business opportunity.”
“We assisted Andrew in the development of his business plan, which identified key milestones in his business life-cycle and potential future opportunities which could assist with the continued growth of his business.
“Also included in the business plan was a full financial forecast, which allowed us to determine critical elements including unit selling price, the break-even point and investment requirements.
“Andrew hit the market at a really good time, craft beer is having a real moment at present, with no signs of slowing down anytime soon. It is fantastic to see Andrew doing so well, with new stockists announced regularly. We look forward to seeing what the future holds for Andrew and Rough Brothers Brewing.”
If you have a business idea you’d like to develop or if you are thinking about starting a business contact the Go For It Programme on 0800 027 0639 or visit: www.goforitni.com.