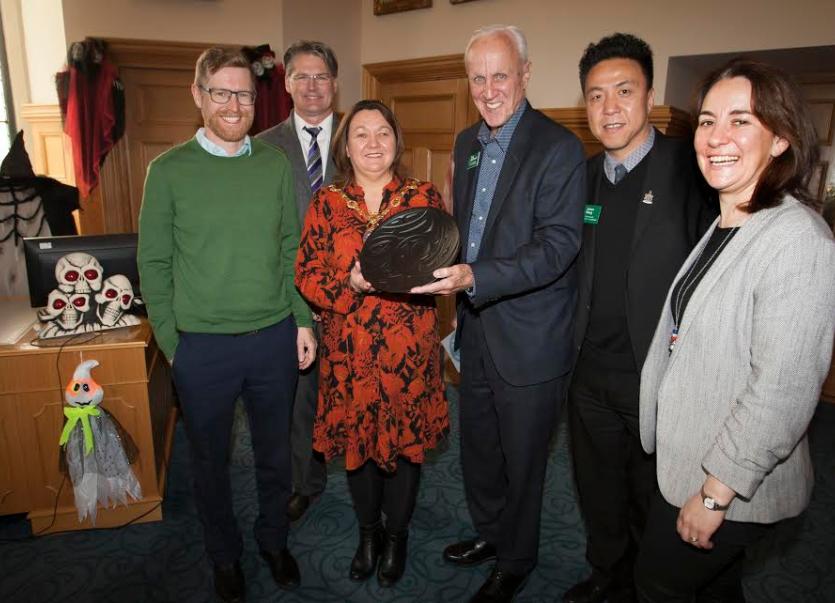 Mayor of Derry City and Strabane District Council, Councillor Michaela Boyle, receiving a gift from Acting Mayor of Burnaby, Canada, Councillor Paul McDonnell during his delegation’s visit to the Mayo

A delegation from Canada has arrived in Derry on a fact-finding Halloween mission.

Mayor of Derry City and Strabane District Council, Councillor Michaela Boyle, hosted a reception in the for a four person delegation from city of Burnaby who are attending the city’s Halloween celebrations with a view to emulating the festival in their own city in the years ahead.

The delegation is made up of Burnaby Councillors Paul McDonnell and James Wang and the city’s Director of Parks, Recreation and Culture Dave Ellenwood and Art Services Manager David Jordan.

They made the trip following a recommendation from the city’s Mayor Mike Hurley who was born in Magherafelt in 1958 and moved to Canada in the early 1980s where he served in the Burnaby Fire Department for thirty years until his election as First Citizen of the city last year.

During his four year term he is hoping that Burnaby, which has a population of more than 230,000 people, can develop a Halloween festival to match Derry’s - voted the Best Halloween Destination in the World by USA Today.

“I am delighted to welcome representatives from Burnaby to our city and district who will learn more this week about our world class Halloween celebrations,” said Mayor Boyle.

“The visit is a further endorsement of the work the Festival and Events team at Council do along with their partners to ensure the festival has a global appeal and attracts thousands of international visitors.”

During their five day stay in Derry the delegation will meet representatives from Council to discuss a wide range of aspects of the festival.

“The delegation want to learn how the Derry festival organises, how things like crowd control, security procedures and other logistics are managed, how the event is marketed and how such large crowds of visitors are accommodated,” explained Chris Peters, Executive Director of Tourism Burnaby.

“I know there is a big community element to the festivities so we are interested to see how the various organisations work together to deliver the event.

“We want to host our first festival in 2020, Halloween night falls on a Saturday next year so there’s a chance to have a three-day festival over the weekend on Friday, Saturday and Sunday.

“If we can build the festival’s scale and profile each year we would hope to have a week long festival similar to Derry’s by 2025,” he added.