European Union Settlement Scheme must be completed by immigrants. 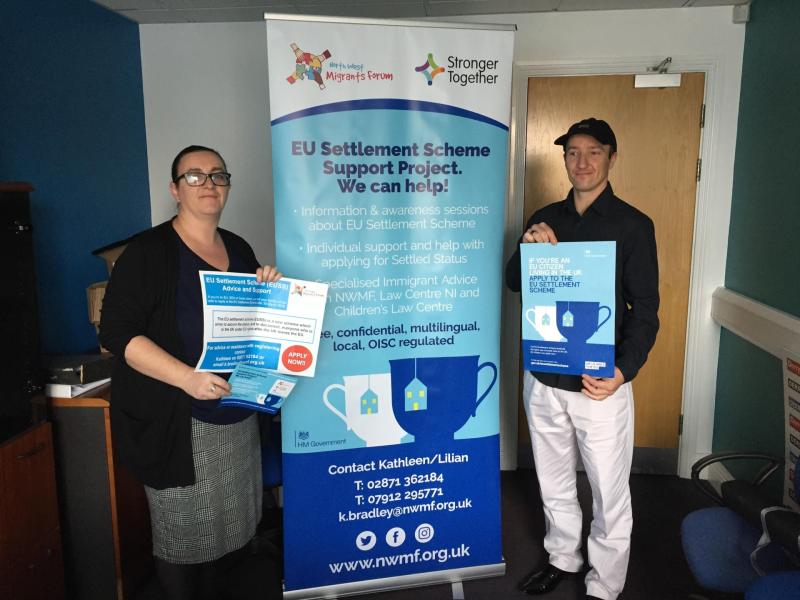 Kathleen Bradley from NWMF and Mikaly Bognar who is originally from Hungary.

The continuing debacle of Brexit has prompted an advice worker at a Derry based advice service for immigrants to ensure they have the correct status to remain within the UK as soon as possible.

At some point after Britain’s departure from the European and the withdrawal of the freedom of movement around the continent for EU citizens, those wishing to remain in the UK will have had to have been approved through what is known as the EU Settlement Scheme.

The European Union Settlement Scheme (EUSS) allows citizens of European countries, the European Economic Area (EEA) and Swiss nationals to apply for the British Government accredited status needed to continue to live, work and study in the UK after Britain’s eventual departure from the EU.

If this status has not been attained, then there is the possibility that those without it may deemed to be living in the country illegally.

Founded in 2012, the North West Migrants Forum (NWMF) based at Fountain Street in the city, identified that there was a lack of support services for migrants in the wider North West region. Specifically, the organisation was set up to help the black minority, people from non-EU nations, asylum seekers and refugees. But, those who have come here from EU members states wishing to remain have also now been taken under the organisations wing.

Kathleen Bradley from NWMF has been appointed as the advice worker specifically dealing with processing applications to the EUSS and she told the Derry News: “The EU settlement Scheme allows, EU, EEA and Swiss nationals and members of their families to apply for settled status or pre-settled status, which means the UK leaves Europe they will have permission to stay here.

Figures held by the NWMF show that currently, the region is home to approximately 3,500 migrants from around the globe. But, obviously the settlement scheme deals with those people from EU member states or states who operate at some level within the EU.

Kathleen Bradley continued: “Applications operate purely online. You have to have an email address and a mobile phone, because part of the application is that they text you a PIN number and then you have to confirm your email account. Decision letters are never actually posted out – everything is done online. People get their decision via email, then they can print it out and show it to whoever they need to.”

The fact that the process does not involve human interaction and immigrants can face language barriers and lack of access to digital equipment can place applicants at a daunting disadvantage.

“There is a fear factor there, in case they do something wrong and it messes up the chance of getting their status. Then there’s the practical problem that people don’t often have top of the range mobile phones that can access email accounts. So, we do have the equipment at NWMF and we can provide a one-stop shop for this process.

“I can set up email accounts, use our work mobile phones as the text message number to get the PIN and use tablets to take pictures because you have to scan your face. The mobile phones also have to be of a standard that they can read biometric chips.

“This is the first time that the UK has ever created one massive database of EU, EEA and Swiss nationals that are here. I don’t think there’s ever been anything of this nature before because people had the luxury of freedom of movement. This is the reality now. You have to be on a list.”

The ongoing uncertainty over the actual timeframe when Britain will finally leave the EU is also creating a knock-on effect for applicants to the settlement scheme.

“It means that if there’s a no deal Brexit the deadline for the scheme is December 31, 2020. If there is a deal the cut-off point is June 2021. But, if you don’t have settled or pre-settled status by those dates, that’s it. You are an ‘illegal person’ in Northern Ireland. It’s crazy, absolutely crazy,” said Kathleen.

Just this month alone, the NWMF have helped 19 people make their EUSS application. Of the five decisions already made by the Home Office, all have been successful. But Kathleen Bradley is urging all those needing to apply to come forward as soon as possible.

She continued: “If the first deadline is December 2020, people won’t even think about applying until August or September next year. So, it needs to be done as soon as possible. It’s better to get it done now rather than wait until thousands of people apply at once and the system may not be able to cope.

“I would be cautious in case there’s a massive influx of applications. I had two cases this month when the system at the Home Office end hasn’t been working properly.”

Whilst the process appears straightforward if applicants are well versed in computers and a good handle on the English language, this isn’t always necessarily the case for many immigrants who may also be unused to the bureaucratic terminology used in such processes.

Mikaly Bognar hails from a town around 100 kilometres from the Hungarian capital of Budapest and arrived in Derry in July this year from England and has already successfully applied for settled status under the scheme.

“I have been in the UK for six years and when I tried to get settled status because of Brexit it caused me a lot of panic and a lot of stress.”

Mr Bognar said that as the prospect of Brexit became a distinct reality he encountered racism in his place of work and elsewhere and felt it was better to move on.

“I was working in a bakery for two and half years. I was early every day and did everything right, then my English manager said to me one morning ‘ba---d Hungarian immigrant, you are going home.’

“So, I left England and I went to Dublin then – it is beautiful, but I found it a very dangerous place. But Irish people are friendly and helped me a lot.

“So, I came to Derry and was put in touch with the North West Migrants Forum and I have received a lot of help with getting settled status and I lost all the pressure that I had felt. I want to do voluntary work with the migrant’s forum.

“I can go now and make plans for my future step by step and be happy because I can do everything the right way. I want to tell everyone coming here from other countries to go to the migrant’s forum and get help.”

Anyone needing to apply for the European Settlement Scheme or find out more about the North West Migrants Forum should call at their premises at 10 Fountain Street in Derry, call 02871362184 or email k.bradley@nwmf.org.uk or info@nwmf.org.uk.