Heal the Hurt will close early next month unless an injection of finance is found. 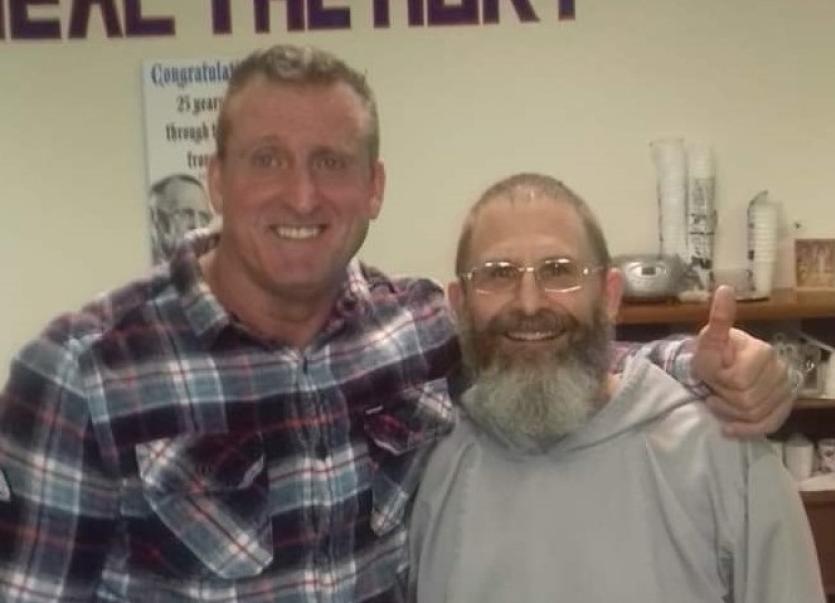 Liam Stewart, founder of Heal the Hurt with one of the priests from the Friars of Renewal.

The founder of a Derry based counselling service has warned it will close within days unless funding is found to keep it going.

Liam Stewart says Heal the Hurt, which helps people combat a range of addictions, will be forced to close on November 4 as money to keep its premises at the city's Northside shopping centre running is on the verge of running out.

Speaking to the Derry News, Mr Stewart who founded the voluntary service in 2016 said: “Seventeen people who attended the group have died since Heal the Hurt opened. The youngest was 19 and the oldest was 54. There is a drink and drugs epidemic in this city. It's massive. Most of the people in my group that died, died from prescription drugs.

“We've treated around 9,000 people, so if the doors close, I don't know where they are going to go. It's the only place I know of in Northern Ireland that you don't need an appointment. If yiu need help, you can turn on the day and start therapy.”

The professional counsellor admits that he's “at the end of his tether” with regard to trying to find a solution to the problem.

“It's the concern that the service will be forced to close. I have approached community organisations for help, but there is little funding out there,” Liam said.

Heal the Hurt offers counselling to those suffering from addiction to alcohol as well as prescription and recreational drugs. Therapy services are provided via group and one-to-one counselling sessions and the organisation also provides educational talks.

Liam continued: “There is a shame and a stigma attached to addiction by some people. But, I try to teach people that there is no shame in addiction. The only shame is in doing nothing about it. That's why I do what I do.

“The first people to help us get set up were Creggan Neighbourhood Partnership. They opened the door to us and let us in and gave us a room free of charge. It got too big and we had to look for different premises.

“But, we have no grants or anything so the expense has become too much. At the minute people's generosity is keeping us above water and no more. I think our closure will mean that it's inevitable that more people will die, because where are they going to go?”

Mr Stewart said the biggest problem in terms of drug addiction he's currently experiencing is through the prescription drug Xanax which is used to treat anxiety and depression.

“This drug has killed a lot of people. They are slow releasing over an eight hour period, so people are taking four of them, getting no hit, so they take another four of them so it slows their heart down and they die in their sleep.

“You get friendly with people and form relationships with them and then all of a sudden they aren't sitting there anymore – they're gone.

“I have got help from the Friars of the Renewal down at the White Chapel in Galliagh in Derry who have been helping me out one day a week for three years. Two of the priests have been there every Tuesday.

“I'm just trying to throw it out there to the community to see if anyine can help, because we are hanging by a thread now. I don't know what more to do or say at this stage.

“We have 60 people currently who sober, who are away from heroin, away from prescription drugs and away from alchol. They are totally substance free. That's 60 people's lives saved and 60 people whose mother and father didn't have to bury their son or daughter.”

Liam added that the organisation had plans to expand their services into County Derry as well.

“We've just been up in Dungiven doing a public information session. They want us to provide services there one day a week and they would supply the room. That was just last week.

“There's a girl comes all the way from Dungiven every day of the week to Derry on the bus and back again. She's a credit to herself and she thought it would be brilliant if we could go to Dungiven. People come to the groups trying to get well and the way forward is educate people on addiction,” he said.

Anyone that wishes to speak to Liam Stewart about helping Heal the Hurt or learning more about the services provided by the organisation should call 07783910072.