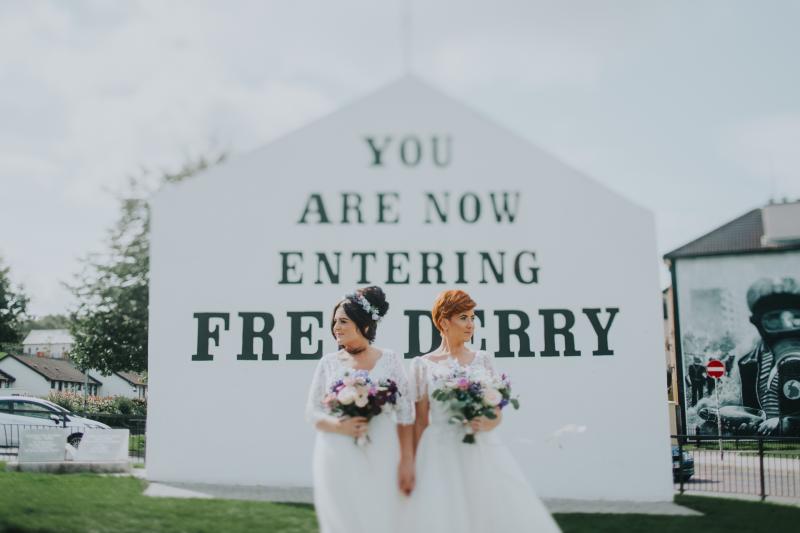 Two young Derry women who got married in Donegal this summer have welcomed the implementation of same-sex marriage legislation in Northern Ireland earlier this week but said they were never going to wait until it became legal here before getting married.

Danielle Doherty and Emma Bradley received hearftelt congratulations from across the city when photos of them at various city centre landmarks appeared on social media on the day of their wedding. The couple also revealed that a photo of them taken at Free Derry Corner was their way of acknowledging the battle for civil rights for all at the iconic monument.

At midnight on Monday, same-sex marriage legislation in Northern Ireland fell into line with England, Scotland and Wales after Westminster enacted the laws in the continuing absence of Stormont.

Same-sex marriage was recognised in the Republic of Ireland in May 2015 after a referendum decreed a change in the constitution that marriage was legal irrespective of the gender of the partners.

Danielle told the Derry News: “Having a wedding in the North wasn't an option. It wasn't anything I wanted to do, because I didn't want a civil partnership, I wanted a marriage. I'm Irish, I live in Ireland and so I wanted to get married here, and it was legal here, so we went to Donegal.

“I think a civil partnership made it seem that what we had was less important – it undermined the whole relationship.

And, Emma said: “We didn't even consider looking at venues in the North, we weren't interested if it wasn't a marriage. I thought why should other people be allowed to marry if they are in love? Why are we any different? We had to border hop to be treated the same.

“When Danielle proposed she didn't ask 'will you be my civil partner', she asked 'will you marry me?'

Asked what the couple thought of the situation where it took the intervention of Westminster legislation to equalise laws on same sex marriage with England. Scotland and Wales, Danielle told the Derry News: “It just seemed as if a small minority of people, the DUP, used this to keep themselves in power somehow. It's just baffling that such people exist who have such backward views about the whole thing. But, we would have never waited until it was implemented here before we got married. It was never going to stop us.

Emma added: “The rest of the world is moving forward, but it seemed that Northern Ireland was just stuck in the 1960s or 1970s and wasn't moving forward with the rest of the UK or Ireland. I don't care whether it was Westminster or Stormont who brought the changes in the law about. It doesn't bother me how it got in. I think it needed to be taken outside of here because it needed that extra push. Up until a few days ago we were married in the south of Ireland, England, Scotland and Wales but not in our own country. We were only civil partners here.”

Danielle said: “For the wedding we decided to do things unconventionally. For a start, we chose to get married on Friday 13th, because we both consider ourselves to be pretty unlucky,” she laughed.

“We got ready together in the morning and had our hair and make-up done together. We went for photos around Derry before the ceremony.

“We went to Free Derry Corner and the Museum of Free Derry, the Craft Village and into Peadar O'Donnell's and poured pints. We love Derry, and ideally yes, it would have been lovely to have got married in Derry but because of the laws it wasn't an option. So we got photos at landmarks that people would know and after that went done to Rockhill House in Letterkenny and got married there.

“We had a spiritualist of Ireland ceremony so it was all legal because we couldn't get a registrar in time. And the reception was at Rockhill House that evening. I think we enjoyed it more because we got to spend the whole day together,” Danielle continued.

Emma added: “If we had done things traditionally, we wouldn't have seen each other until 2.30pm that day.”

The couple admit that getting a wedding picture taken at Free Derry Corner was a purposeful move given the monuments iconic association with the civil rights movement over the last 50 years.

“For me it was. Whenever we met with our photographer she wanted to know where we wanted pictures taken. The first thing we said was Free Derry Corner,” said Danielle.

Emma said: “Free Derry Corner, to me is about it being called Free Derry – it's about being who you want and doing what you want. People lost their lives for civil rights and we were making a stand that we deserve civil rights as well.”

Both women said they had anticipated receiving a few derogatory comments and stares whilst making their way around the Bogside but in fact were overwhelmed by the kind responses of all they encountered, especially after some of the images were posted on social media.

“I wasn't really expecting the feedback that it got. We were doing it for us, for our personal reasons.Then seeing the comments on Facebook of people appreciating us taking a stand for our civil rights was great.

“When we got off the ten hour flight going on honeymoon and checked our phones, there were hundreds of shares and likes on the phptos that the photographer Lisa Byrne had put up. It was unexpected. We're just two wee girls from Derry that wanted to get married,” said Danielle.

The Derry News also asked if the couple have ever felt let down by the political system despite regularly exercising their votes.

Emma said: “Personally, sometimes I've wondered what I am voting for. I have the right to vote and I will use it, but at the end of the day, if there's nobody that speaks to me then I'm really going to have to consider who I vote for.

Danielle added: “There is no Stormont obviously, but that's got to with larger factors. The DUP said no to same-sex marriage and weren't willing to compromise. They are obsessed with being part of the UK, but they don't want all of the UK's laws.”

So, what were the thoughts when same-sex marriage passed into law in Northern Ireland earlier this week?

“My thoughts were, thanks, but we've done it already. You are too late. It doesn't change that me and Danielle are married, but I am happy for the people that spent years fighting for this. We could have been people who said we are not going to get married until it was legal here. But it was legal in this country, you just had to go over the border to get it. But, it's a positive thing that's happened.

“Anybody in our situation who have struggled with their sexuality have felt different and felt that they didn't belong. The solution comes with years of trying to love yourself and trying to accept yourself and realise that you are a person and you're ok to be who you want to be.

“I think for teenagers now and people who are coming out younger and younger, it is still difficult to deal with in top of all the other adolescent problems they have to go through.

Danielle added: “It was going to happen eventually. It had to go down that road, it was just a matter of when. It couldn't be put off forever. It's great for future generations in that they can be themselves now. It's more acceptable now, it's not that big social taboo anymore. Things have progressed a lot.

“We're really fortunate with our families, our parents, grandparents, aunts and uncles who have all be really supportive.”

Emma concluded: “I would never deny Danielle, or who you are to me, or my sexuality to anyone. If people don't like it, that's tough.”