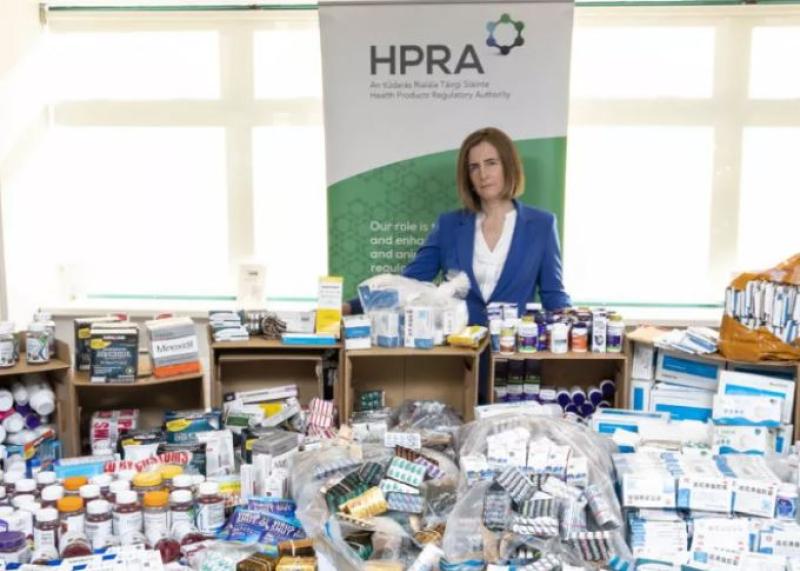 Almost half a million doses of illegal medicine were seized in Ireland during the first six months of this year, a haul which included bogus erectile dysfunction medicines and steroids which were ordered online.

However, the number of seizures dropped overall when compared to this time last year.

There was a markedly reduced interest in sedatives. However seizures of Covid-19-related treatments increased and the amount of seized anabolic steroids, typically used to bulk up muscle, did not change.

People ordering these products simply have no idea what they are getting, and products can pose health risks, the Health Products Regulatory Authority (HPRA) warned this week.

Some 486,088 dosage units of falsified and other illegal medicines were seized, down from 895,591 units detained between January and June last year. This year sedatives made up most of the seizures (28%), followed by anabolic steroids (12%), erectile dysfunction medicines (9%) and analgesics (7%).

One unit seized is equal to an individual tablet, capsule or vial. The number of sedative medicines, including melatonin products, seized plummeted from 434,157 units between January and June last year to just 137,587 units so far this year.

According to Grainne Power, Director of Compliance with the HPRA, the reduction of detentions in the first half of 2022 cannot be linked to any one factor alone.

“Although the volume of detentions has decreased, we are still observing significant levels of potent, prescription medicines that are being illegally supplied into Ireland. These levels remain very concerning with so many people prepared to take a chance in ordering prescription medicines online. When you acquire medicines from unregulated sources, you simply have no idea what you are getting. This isn’t merely about people wasting money on falsified or counterfeit products, it is also about the very real dangers of significant side effects, of using a product without supervision where there is no guarantee of what it contains and of experiencing interactions with other medicines being taken. All of these risks have the potential to make your condition worse or cause serious harm to health,” Ms Power said.

To highlight the health risks of sourcing prescription medicines online, the HPRA announced the launch of a new multi-platform digital information campaign to warn the public of the issue. Incorporating both social media and display advertising, the campaign will target members of the general public and highlight to them the very real dangers presented when buying prescription medicines online.

Ms Power outlined the role HPRA’s digital campaign can play in increasing public awareness and understanding of the safe supply routes for medicines and the associated dangers of buying prescription medicines online.

“Given the fact that so many transactions take place online, it is particularly important and appropriate to highlight those risks through online channels and, where possible, to influence the decision of the buyer prior to purchase. We hope our campaign will make people stop and think before they seek to purchase prescription medicines online and ultimately persuade them not to use this route,” she said.

As part of its regulatory activities in this area, the HPRA routinely monitors websites, social media sites and e-commerce listings selling prescription medicines into Ireland and will take action to remove or amend content when necessary.

The HPRA works in close co-operation with colleagues from An Garda Síochána and Revenue’s Customs Service with whom there is significant inter-agency collaboration to combat the illegal supply of health products into and within Ireland. It also co-operates and shares intelligence with other regulatory and law enforcement agencies worldwide to prevent the illegal manufacture, importation and distribution of medicines, medical devices, and cosmetics.