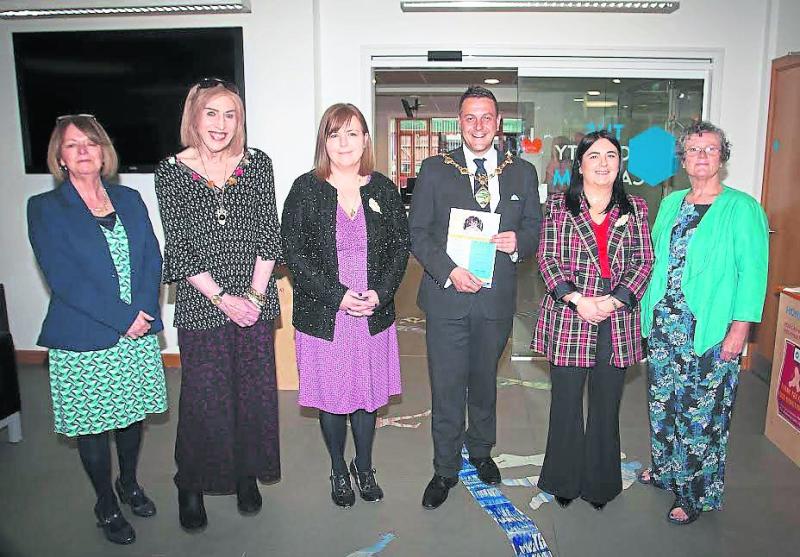 A large crowd turned out on Friday night last for the Lyra McKee Writing Awards held in the Holywell Diverse City Building in Derry when the winners in the four categories received their awards.

In some ways it was a bitter-sweet prizegiving celebration as it was attended by two of Lyra’s sisters, Nichola and Mary, as well as by Nichola’s husband, John, who all received a warm reception from the attendance.

After a brief introduction by event organiser, Eamon Baker, extolling the impressively high standards, the large number of entries, and indeed, the huge interest in the competition, he called on Mayor, Graham Warke, to address the attendance.
The Mayor reiterated Eamon’s comments and said he was honoured to be able to play a part in the awards and hoped it would go from strength to strength in years to come, keeping Lyra’s memory alive.

Lyra’s sister Nichola introduced a short film based on her late sister’s compelling piece ‘Letter to my fourteen-year-old self’ and described herself as ‘blown away’ by the strength of the warmth and welcome she, her husband and her sister received on the night.

The Mayor also commended each and every one of the writers who took part in the competition and had particular words of praise for the young adults who had got involved, many of who were present for the prize giving.

Towards Understanding and Healing then ‘premiered’ on screen a very recently written and deeply touching poem-Suaimhneas - from poet, playwright and film maker, Damian Gorman, who dedicated his poem to Nichola, Mary, Lyra, the entire McKee family and to Lyra’s partner, Sarah Canning.

Gifted vocalist, radio presenter and counselling psychologist, Anne Tracey, brought the evening to a close with a very moving rendition of the beautiful Roy Arbuckle song 'God smiled when you were born'

Speaking after the awards, Eamon Baker said: ‘Towards Understanding and Healing remains grateful for the support this whole process has had from writers and writing facilitators - Sue Divin, Felicity McCall, Pamela Brown and Jim Simpson - who provided many hours of writing workshops throughout our community in the months before the closing date for the competition.

‘We acknowledge, too, the tragic loss of writer, creative writing facilitator and peace-builder, Liam Campbell. Liam was very supportive of this project from the word go and had been pencilled in to facilitate a number of writing workshops. His loss, like that of Anita Robinson who had agreed to adjudicate, like that of Lyra herself, is incalculable. Liam, author of ‘The White Handkerchief,' worked in the Playhouse where Theatre of Witness is based.

“Towards Understanding and Healing is grateful for the very authentic peacebuilding workshops provided by Theatre of Witness performers, co-ordinated by Kieran Smyth, in support of this writing project including James Greer, Anne Walker, Kathleen Gillespie and Robin Young.“’

‘They, and the Community Relations Council, have backed the project from its inception. Praise, too, for Ulster University staff who put on a lively day of writing workshops back in December up in the Coleraine campus; and also Junction staff, Richie and Maureen Hetherington, have been very kind and supportive all along.

“None of this would have at all been possible without the blessing of the McKee family and for that we at Towards Understanding and Healing are very grateful as we are for the support of St Mary’s priest, Father Joe Gormley, who gave Lyra the Last Rites on that horrific night, April 18th 2019.”

Calling on all to continue with their writing endeavours going forward, he concluded: “And as we move forward there is no doubt that Lyra herself would be encouraging all of us to keep on writing, to keep on being creative.”