Actor swaps Walled City for jail as she stars in new Channel 4 series which begins on January 6, 2021 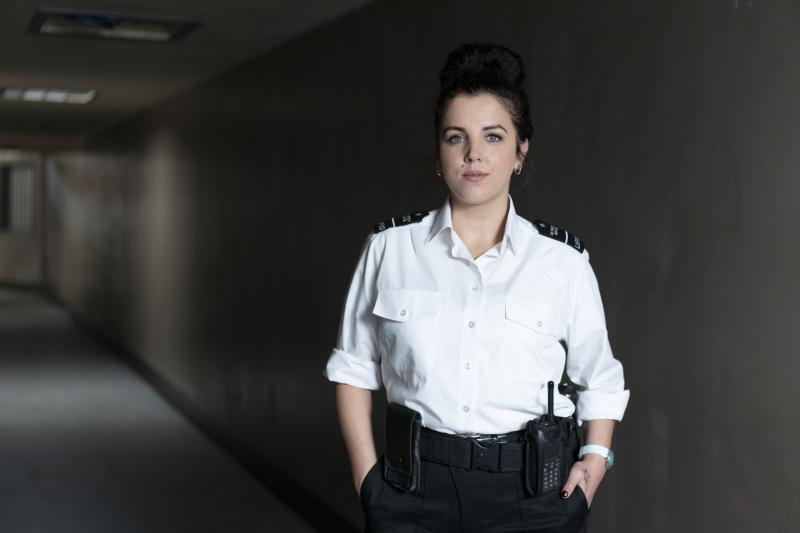 Of the new prison drama, "Screw", Derry actress, Jamie-Lee O'Donnell said: "There's some quite heavy stuff in 'Screw', but they’re trying to keep it as true to life as possible"

Derry Girl, Jamie-Lee O'Donnell has swapped the school uniform for a prison one as she stars in Channel 4's latest drama, “Screw”.

However, the C-wing of the fictional Long Marsh men's prison – set in the north of England – provides a baptism of fire for Rose who is embarking on a new career.

While her “Screw” character has some of Derry Girl Michelle's outward swagger and bravado, she has to adapt fast to the pressure-cooker atmosphere of prison life under the stern and watchful eye of her superior Leigh Henry (played by Nina Sosanya).

For Jamie-Lee, filming the series was an eye-opener on how the prison system is run and gave her a greater understanding of how jail-time may not be the ultimate solution for those who fall foul of the law.

She said: “I hadn’t really thought about it (the prison system), to be honest. I was surprised by how underfunded and overcrowded the system is.

“There are people in there with severe mental-health problems, people who have made awful mistakes, people who have stolen from the corner shop, and all those people are treated the same in terms of where they end up and their rehabilitation.

“I just don’t understand how prison can be a solution for all those different people.

“The producers brought in some professional prison officers so we could find out what it’s like to work in a prison, and they were very honest with us.

“Two of the officers we spoke to were women and that was a big surprise, learning how many women work in men’s prisons.

“Although these were small women, they were obviously really confident and very powerful. It wasn’t the obvious image whenever you think of a prison officer.

“We learnt some basic techniques about how to defuse a physical situation, and also the respect that they have for the job, the compassion they show for their colleagues and the prisoners. It added a lot of layers for me.

“There's some quite heavy stuff in 'Screw', but they’re trying to keep it as true to life as possible because not everything is doom and gloom – even in dramatic times, there's some sort of a silver lining.

“It's a survival instinct to find the lighter side of things, especially when the reality you're faced with is quite dark.

“I got involved first and foremost because of the characters, who were so real and well written.

“Rose seemed like a really complex and interesting character and there are a lot of twists and turns to the show.

“After I’d read the first couple of episodes, I was desperate to find out what happened in episode three, which is always exciting.

“In some ways Rose is an easy character to relate to. Our journeys are quite different, but how she handles things and her attitude towards things feels quite familiar.

“Because of where she comes from, she has these really positive attributes about herself and she's quite adaptable. I could definitely relate to that.

“I don’t think prison is what she’s expecting. I don’t think she’s intimidated by it either, but she builds different relationships with different people, including some people she never would really speak to on the outside – people who remind her of home.

“There are a lot of interesting dynamics within the prison that allow her to open up a little and express herself in different ways.

“One of the biggest challenges was doing a northern English accent – I tried my best.

“I really enjoy doing accents and although I was nervous, putting my heart and soul into it, thankfully people on set responded really well.”

As for “Derry Girls”, a third – and possible final – season is being eagerly anticipated by fans and Jamie-Lee insists their patience will be rewarded.

She added: “It's definitely happening. I haven’t seen any scripts yet but Lisa McGee has told me the storyline for Michelle and I’m so excited to get back.

“It’s great craic. The wait has been a bit frustrating, but I’m focusing on the positive – it’s coming.

“With 'Derry Girls' and 'Screw', I’m lucky to have the chance to do both in my career, doing Rose and going back to Michelle at some point.

“Some of the scenes in 'Screw' are a million miles from Michelle, which I'm really happy about.”