Francis Lagan died in a tragic accident this afternoon. 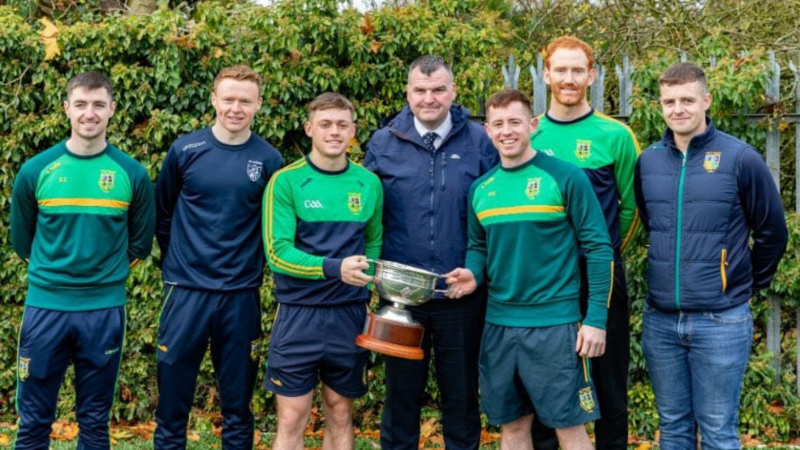 Tributes have been paid to a County Derry principal who sadly passed away today as a result of an accident.

Francis Lagan was principal of St Mary's PS Glenview, in Maghera, and is thought to have been killed when a falling tree struck his car this afternoon in Antrim.

Members of the community in south Derry have taken to social media to offer their condolences to his family and express their shock at his passing.

Watty Graham's GAC Glen, tweeted a photo of Mr Lagan with a number of their senior championship-winning footballers as they brought the John McLaughlin Cup to Glenview just a fortnight ago.

"We as a club and community will stand strong with the Lagan family in the days, weeks and months ahead. Rest in peace Francis."

Mr Lagan was a past pupil of St Patrick's College, Maghera, who also expressed their shock at his passing.

"The entire College family is shocked to hear of the sad passing of Francis Lagan, brother of our Head of Mathematics Mrs M. Devlin," they said.

"Francis was a valued past pupil and Principal of our feeder Primary St. Mary's, Glenview. He is pictured as part of the 1996 Forrester's Cup winning team. He will be sadly missed by the entire community.

"Education in South Derry has lost a giant in his prime. Condolences to his wife Louise, Mrs M. Devlin and the entire Lagan family. St Patrick, pray for him."

2 years ago, Francis Lagan welcomed the BBC to film a preview of the Derry final at his school. He did the same 4 weeks ago & witnessed his club win a first title. He cared obsessively about Family, Maghera & it’s people. Devastated to hear he has died. Life is beyond cruel pic.twitter.com/o41eSIdJ1G

"I am devastated and heart broken to hear the tragic news of Francis Lagan's passing," she said.

"When he was principal of St Mary's Primary School Gortnaghey he invited me in 3 times to read my books, each time I had a very welcoming experience and found him to be a real gentleman with a very kind demeanor.

"Just this week I visited him in his new school at St Mary's Primary School Glenview and received that same warm welcome. He was an outstanding principal and it is a devastating loss for the school and the community.

"My deepest sympathies go out to his wife, children and family. They will all be in my thoughts and prayers at this very sad time."

St Mary's PS Draperstown, where Mr Lagan had worked previously, said it was a 'devastating loss' for the area.

"It is with extreme sadness that we learned of the sudden and tragic death of our friend and former colleague, Francis Lagan," they said.

"Our thoughts and prayers are with his family at this tragic time. May God grant him eternal rest and give his family strength to cope with this devastating loss."

St John's PS Dernaflaw said he would 'go out of his way to do you a good turn' and offered condolences to his family.

Francis had previously been principal of St Mary's PS Gortnahey, and local GAA club St Colm's GAC Drum said it was a 'privilege' to work with him.

"It is with a heavy heart this morning that we learn of the passing of Francis Lagan," they said.

"Former principal of St. Mary's Gortnaghey, and friend to anyone he met, our youth had the pleasure of being taught and led by him in education and in sport.

"We as a club had the privilege to work alongside Francis as we prepared for our joint anniversary gala in 2017.

"I remember at his leaving ceremony in the school he told us about his strong link with St. Mary's, so I think it fitting at this time we ask of you all to say a Hail Mary for him now, for his wife Louise, their children and wider family circle.

"Keep them in your thoughts and prayers over the coming weeks."

Mr Lagan's death is the third tragedy to rock the community of Maghera in the last month, following the deaths of Jamesy Gribbon and Declan McFalone.