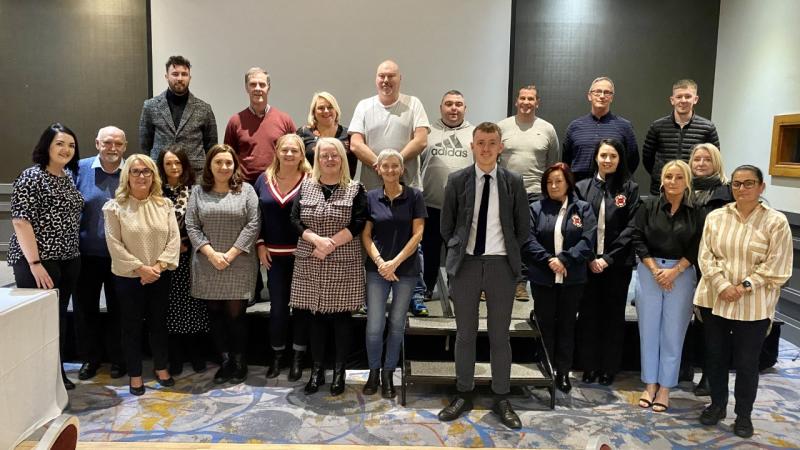 Sinn Féin MLAs, Padraig Delargy and Ciara Fergsuon, along with Sinn Féin Councillors, Sandra Duffy and Emma McGinley, meet with a number of representatives of mental health groups across Derry

Foyle MLA Pádraig Delargy has said a meeting of local mental health organisations is a ‘good first step’ in efforts to deliver a top-class mental health service for Derry.

Mr Delargy – along with fellow Sinn Féin MLA, Ciara Ferguson and Sinn Féin Councillors, Sandra Duffy and Emma McGinley – met with a number of mental health charities, organisations and volunteers from across Derry.

The meeting was part of an initiative to gain an insight into the work being done to help people with mental health issues and what how that work can be supported by politicians.

Back in September, the Bogside & Brandywell Health Forum received an award of £500,000 via a grant application process run by the Executive in Stormont.

However, the Forum's general manager, Aileen McGuinness, said at the time that mental health services in Derry needed long-term funding and not have to be reliant on an annual grant application being successful.

Mr Delargy insisted that this meeting would help him and his colleagues gain a greater understanding of what is needed to help Derry's organisations get on top of the mental health issues facing the city's residents.

He said: “We’re committed to developing a first-class mental health service for Derry to tackle the crisis in our communities.

“I think this meeting is a good first step to allow us to listen to the organisations and individuals and their experiences.

“It’s important that this work is informed by the charities, organisations, volunteers and professionals who are working daily to support people.

“We all know someone who has been touched by the mental health crisis – we’re focused on finding solutions for them and to deliver better services.

“To achieve a first-class mental health service and tackle the crisis, we need to work together, that’s what we’re committed to doing.”

She said: “I very much welcome that the council will now work with the Public Health Agency and local businesses across the city and district towards the provision of training to ensure dedicated mental health first aiders are available in local workplaces.

“Providing mental health first aid training will be a vital resource to help people spot the triggers and signs of mental health issues and to have the confidence to step in and the knowledge to help.

“There isn’t a family in this city that hasn’t been touched in some way by mental health related issues so we need to make this a priority for the council and wider government, particularly as we emerge from a pandemic that will only have exacerbated the mental health problems that many people face.”