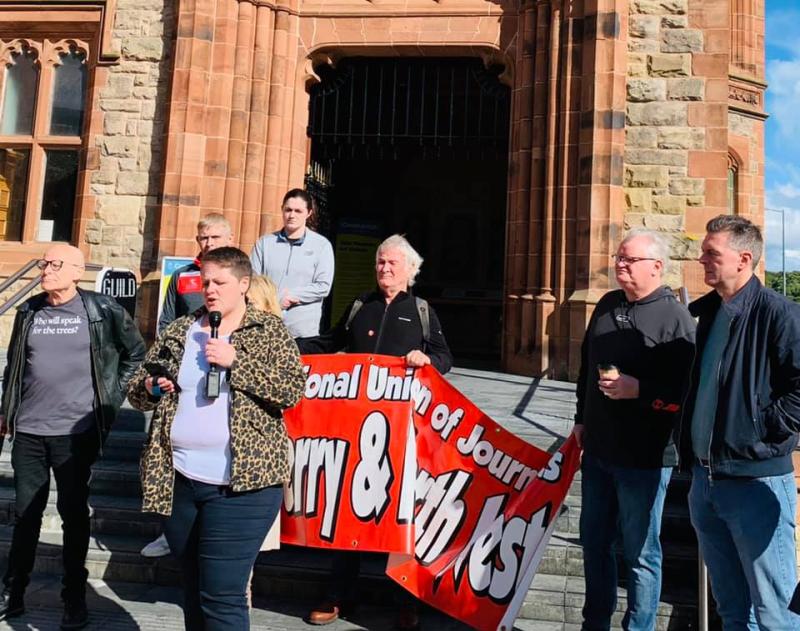 Sara Canning, the partner of Lyra McKee who was killed in a riot in Creggan, addresses the vigil held for journalist Martin O'Hagan on the 20th anniversary of his murder

The vigil marked the 20th anniversary of Martin's murder in Lurgan as he walked home with his wife only to be shot dead by a gunman from Loyalist terrorist group, the Red Hand Defenders.

Sara's partner Lyra McKee was also shot dead while covering a riot in the Creggan area of Derry. As with Martin O'Hagan's murder, no one has been convicted for her killing.

In her tribute to O'Hagan, Ms Canning said that freedom of the press was a necessity for a fair society.

She said: “Northern Ireland is one of the most dangerous places on earth to be a journalist.

“Journalists are truth seekers, light bringers who shine torches into our most hidden and awful corners, we need an impartial and Uncompromised press.

“Martin O’Hagan was the epitome of this, a man who turned his life around and sought to shed light on all of the worst parts of this society, to seek justice and to put in the hard work.

“As someone who has loved and shared a life with an investigative journalist I know the fear of knowing your partner is meeting some shady figure on a mission to uncover truth.

“Twenty years is too long to wait for justice. Martin’s murderers are known. Why are they allowed to walk the streets?”