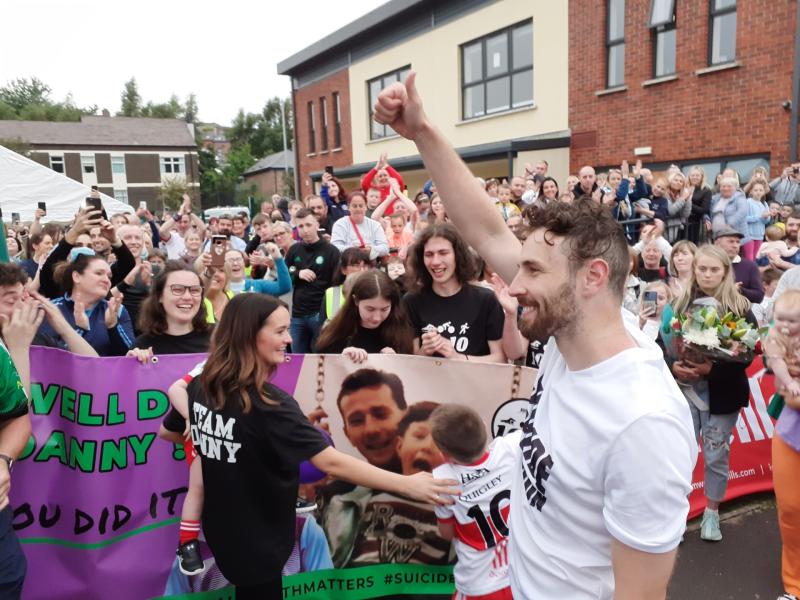 The SDLP leader praised Quigley in Parliament for his recent outstanding athletic achievement of completing 10 Iron Man challenges in as many days.

Quigley set about his arduous task to raise money for Pieta House and the Bogside And Brandywell Health Forum’s 1-2-1 Counselling Service, in memory of his father Colm who died by suicide 10 years ago.

As Danny says on his Just Giving page where people can donate to his chosen causes: “My Father died of suicide 10 years ago. He was a model father and my teacher. His passion for sports and motivation to push himself to his physical limits have lived on in me.

“In the 10 years since his death I have remembered him and carried on his memory in different ways.

“I’ve opened a gym 4 years ago which has cultivated a community of like minded people that put their fitness and mental well-being first.

“With the help of the Bogside and Brandywell Health Forum we’ve held 'The Jog in the Bog' – a charity 5k run through the Bogside, in his memory every year we raise hundreds for mental well-being charities.

“As it’s his 10th anniversary I’ve wanted to remember him especially this year, in a way that is true to his character and in a way that challenges myself.”

Speaking in Parliament, Mr Eastwood said: “Danny stands out as an inspiration to people across Derry and beyond for his commitment and athleticism. His contribution will undoubtedly have a positive impact on the lives of many across the city.

“Danny sadly lost his father Colm ten years ago. To raise much-needed funds for Pieta House and the Bogside and Brandywell Health Forum’s 1-2-1 counselling service, he undertook an unbelievable feat of human strength and endurance of completing 10 Iron Man challenges in 10 days.

“I am proud to raise Danny’s astounding feat in Parliament and celebrate all the work that he has done to raise funds for these vital services. Derry stood squarely behind Danny through his journey and has supported Danny by raising over £88,000.

“The people of Derry, time and time again, show their generosity, but government needs to step up and provide more significant funding for mental health support across the Northwest.

“Through Westminster, I hope other MPs will celebrate and congratulate Danny on his incredible achievement so he can inspire others to do the same.”

Danny so far has raised more than £90,000 on his Just Giving page – however he is still short of reaching the £100,000 target he's set himself. To make a donation visit: https://www.gofundme.com/f/dannyquigley10