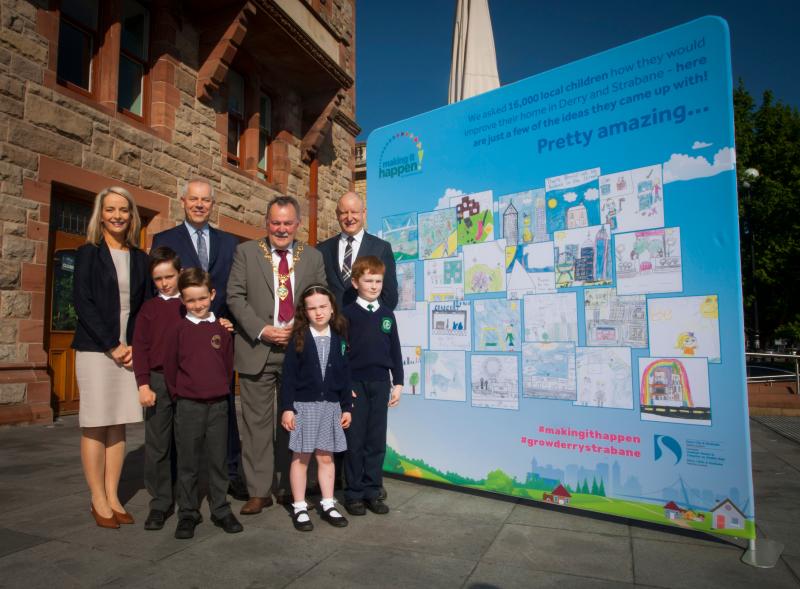 Just some of the many fantastic aspirations of local children for Derry and Strabane have been captured in a special display which was unveiled by the Mayor this week in the Guildhall. Thousands of local primary school children took part in a campaign of engagement as part of the Community Planning process. They were asked to give their views on how they would like the future of Derry and Strabane to develop, with some visionary and creative results. Mayor of Derry and Strabane, Councillor Maolíosa McHugh, joined local school children for the official unveiling of the display, which is now on show in the Guildhall. And he praised the ambition and originality of the children who took part. “I am delighted to see some of the many wonderful ideas which were submitted as part of the Community Planning process being shared with the public,” he declared. “During my time as Mayor I have been impressed on so many occasions by the ambitions expressed by our young people and the pride they have in their home. The Strategic Growth Plan which emerged from the Community Planning process reflects the ambitions of thousands of local people, including our young people. The plan will shape development here until 2032, so it will have a major impact on the lives of the younger generation, who will hopefully enjoy the many benefits of the strategy in the long term. “I want to thank all the school children and teachers who took part in this process, your contribution has been of immense value. I would encourage everyone to call into the Guildhall to see just some of the brilliant ideas which emerged – the future is definitely in safe hands.” The Strategic Growth Plan for Derry and Strabane launched in November 2017, following a major campaign of public engagement taking in the opinions of thousands of local people. Schools were asked to submit their views on a range of themes designed to transform the Council area over the next 15 years to achieve a thriving, prosperous and sustainable City and District with equality of opportunity for all. A Children and Young Person’s version of the plan is now available to view online at growderrystrabane.com where you can find out more about Community Planning and how it affects your future. Pictured above: Mayor of Derry City and Strabane District, Councillor Maolíosa McHugh, pictured with Council Chief Executive John Kelpie, Strategic Growth Partnership Co-Chair Gavin Killeen, Rachel Craig, Strategic Business Manager, DCSDC, and local primary school children launching the children’s display at the Guildhall.
ADVERTISEMENT - CONTINUE READING BELOW