Over 15,000 people get involved with new project aimed at transforming the image of Derry's three bridges and the River Foyle 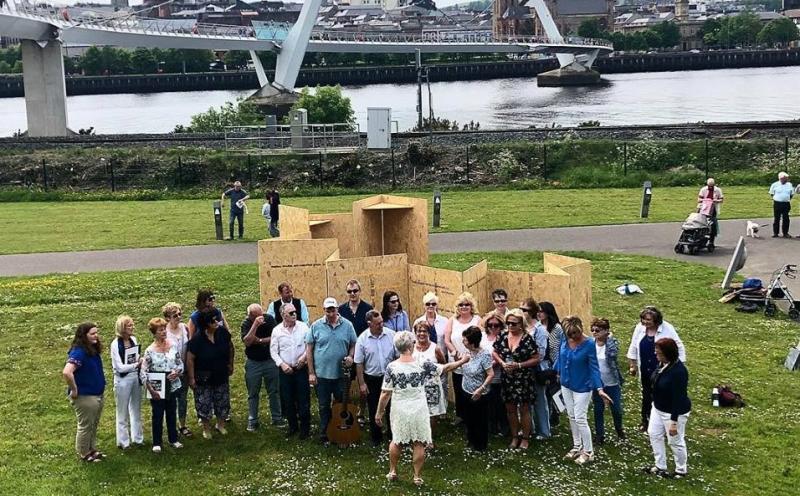 A project which aims to improve the health and well-being of the people of Derry through cultural activity on the banks and bridges of the River Foyle has been praised after its latest venture. Over the bank holiday weekend and the last week of May, Our Future Foyle hosted a series of pop-up interactive art installations along the Peace Bridge in the city designed by architectural students from Queens University Belfast. Over 15,000 people crossed the bridge over four days - with a sample showing 80 per cent of those stopping and engaging with the installations in some form. The interactive pop-ups form part of a study ahead of a long-term proposed sculpture park of over 20 high profile artists’ interactive sculptures to be placed along the Foyle banks and bridges connecting the riverfront with lighting, sounds and art. As part of the Project the team formed a collaboration with local architect Shane Birney and the department of architecture at Queens University Belfast lead by Dr. Nuala Flood, with support from Mr. Niek Turner, Dr. Jasna Mariotti and Dr. Sarah Lappin, to create pop up installations as a student design competition. One of the installations, Finding Foyle, produced sound and community artwork connected to the balustrades of the bridge creating an exhibition out in the public walkways and connecting people with local work raising awareness around mental health. Another installation, ‘Pipe Down and Listen’, saw a wind tunnel that looked like a hedgehog sit alongside the Ebrington walls in which people could walk through and play, creating their own sounds, whilst ‘Tessellate’ saw a series of triangles created to form a busker’s stage in which local performers played to passers-by. The pop ups were built as part of a larger public realm workshop called ‘Architecture of Change’ being hosted by The Void Gallery from May to July. Ralf Alwani of Our Future Foyle said “playful pop-ups that capture the best of cultural activity and community architecture were on display for the city to engage with at the riverfront. The aim of these interactive sculptures is to tackle negativity and isolation around the river creating positive presence at all hours around the bridges and banks.” Foyle MP, Elisha McCallion, said: “There is a vision for the river to become somewhat of a tourist attraction and animated space in relation to Our Future Foyle it looks at the issues that affect the mental health of young people and how they view of the Foyle in a way that has never been done before in the city. "It looks to branch out and use the asset that is the Foyle in a more positive nature, this event is another stepping stone to achieve that vision." Other projects proposed from Our Future Foyle such as the Foyle Bubbles will see 42 pop-up pods occupy the river with retail and community uses while the occupiers will be trained in mental health education to benefit the public. The team are set to launch the largest proposed art installation in Northern Ireland creating a landmark known as the Foyle Reeds for the Foyle bridge this year. Proposals have been developed with the community since 2016 through a series of events and workshops that have engaged directly with over 4000 people from the city. The city’s Nerve Centre Fablab cut all of the exhibition elements by CNC machine while local joinery company Love Wood and co donated the timber. The team would also like to thank Queen’s University Students and Local companies which sponsored or gave In-kind support to make the event happen; Aligned, Ali and Laura Photography, City Centre Initiative, Benchmark Construction, Chris Quinn Architects, Derry Precision Tools, First Class Builders and Leadon Timber frame.
ADVERTISEMENT - CONTINUE READING BELOW