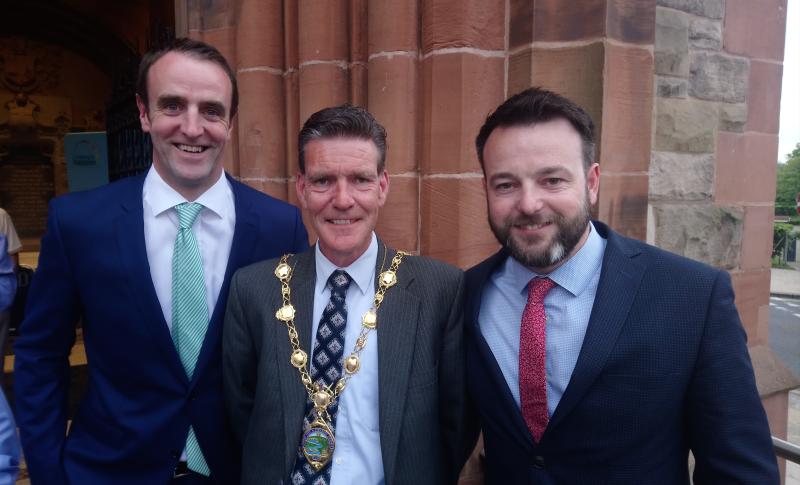 The newly elected Mayor of Derry and Strabane, John Boyle has pledged that the city and district will be a 'welcoming place for all'. The SDLP's John Boyle, who has served as the Deputy Mayor over the past year, received the chains of office from Sinn Fein's Maolíosa McHugh at the council's AGM in the Guildhall earlier this evening. Commenting, Mayor Boyle promised to serve all the people of the City and District 'with integrity and honesty, regardless of their religion, class, colour, sexual orientation, gender or political affiliation'. Mayor Boyle said securing a City Deal for the Council area will be top of his agenda this year. He commented: “It is my intention to continue to work towards achieving a City Deal for our Council area. A City Deal really can be a significant game changer for people here. "Allowing us to have a greater degree of fiscal autonomy and to concentrate resources where we will see them best realise our potential to grow as a city and region. It is long past time that we as the North West regional capital got our fair share." He also revealed that Foyle Search and Rescue would be his chosen charity, given that their volunters are the 'epitomy of the word selfless'. Above - the newly elected Mayor of Derry and Strabane John Boyle pictured outside the Guildhall tonight with the Foyle SDLP MLA Mark Durkan and the party leader Colum Eastwood.
ADVERTISEMENT - CONTINUE READING BELOW