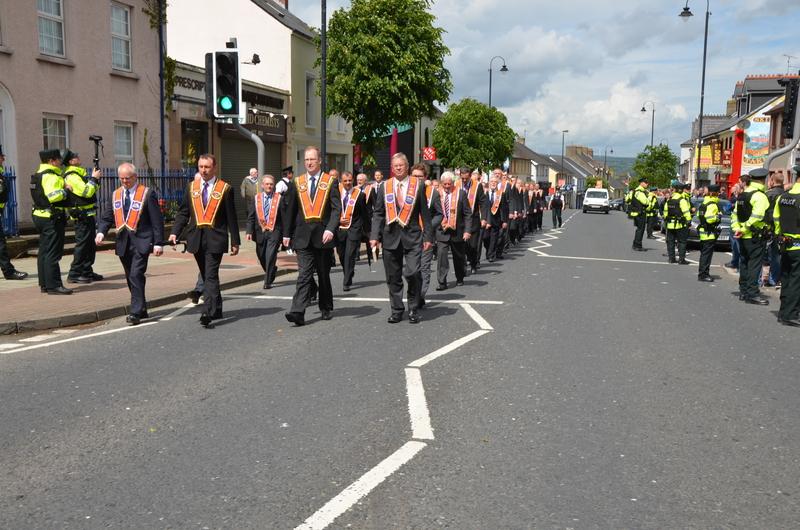 By Eamon Sweeney   A nationalist residents group in Dungiven has taken legal advice on an Orange Order parade in the town planned for this Sunday (June 10). The Dungiven Concerned Residents Association say that, if necessary, they will take High Court action to block the parade because of apparent changes to the Parades Commission determination on the march, that they say alters the premise of a local agreement between them and the loyal order. In recent years it has been agreed that only local members of the Orange Order participate in the parade to Dungiven’s Church of Ireland on Main Street. Last year’s Parade Commission determination on the annual parade states: “The notified purpose of the parade is “Annual Sunday Service”. There are 75 participants notified. The Commission understands that the parade participants will comprise local Orange Order members only.” However, this year’s determination states: “The notified purpose of the parade is “Annual Sunday Service.” There are 75 paticipants notified.” The change in the wording of the Parade Commission determination has caused Dungiven Concerned Residents Association to become concerned that there could be an influx of members of the loyal order from other areas, and they say that has caused tensions in the area to become inflamed. A spokesman for the residents association told the Derry Post: “For years the number taking part in the parade have increased. We believed coming to a local agreement could help resolve this. Instead, this appears to have changed without anyone from the Parades Commission notifying us, so this has escalated the situation. It’s caused the tension in the town to be doubled. “There’s been no communication of any kind and this could have been avoided.” The annual parade has been a source of controversy in the past and has necessitated a heavy police presence on the town’s Main Street on occasion, as well as drawing protests from the nationalist community as the parade passed by. This Sunday the parade is scheduled to start at 10.10am. The outward route of the parade is is from Dungiven Church of Ireland, Main Street, to Dungiven Presbyterian Church, New Street with the return to the Church of Ireland along the same route. The spokesman from the Dungiven Concerned Residents Association added: “The parade used to start early in the morning but it has become later and and it will clash with people leaving Mass on Sunday morning.” And, Sinn Fein Councillor for the area, Sean McGlinchey told the Derry Post: “There already have been discussions with legal representatives of the residents association to plan High Court injunction to block this parade if necessary. “We’ve had no contact from the Parades Commission on this. It’s diabolical. “There is a lot of tension in the town over this. But, we are here to support the residents and as I said take legal action if necessary.” A spokesperson for the Parades Commission told the Derry Post: "The Parades Commission has received a notification by Dungiven LOL 2036 regarding an annual Church parade in Dungiven on Sunday 10th June, involving 75 participants and no band. This notification reflects a local accommodation that the parade will not exceed 75 participants, a measure introduced a few years ago to reduce community tensions. In 2017, 56 members of the Orange Order took part. The Commission has considered all representations and information received; these include the parade's purpose, timing, recent history and other relevant issues."
ADVERTISEMENT - CONTINUE READING BELOW