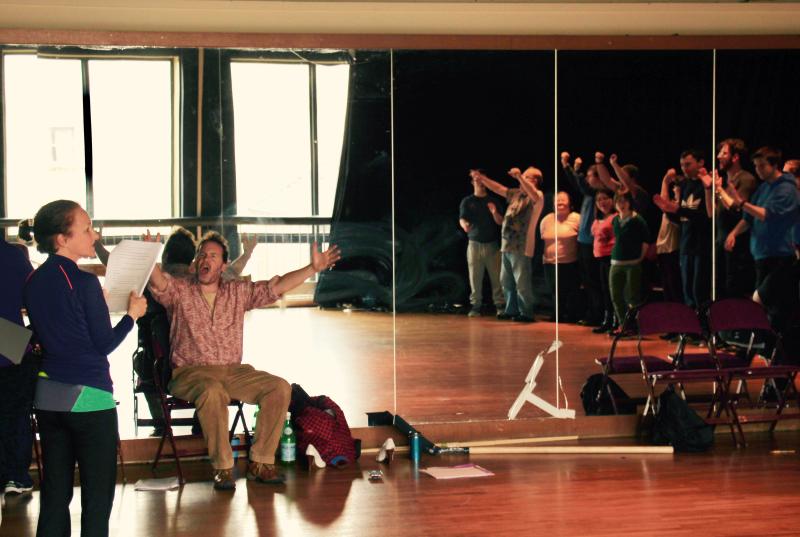 Derry’s Stage Beyond are set to blow audiences away this weekend when they rise to yet another theatrical challenge to stage ‘Gulliver’s Travels’. Under the expert direction of award-winning director Conall Morrison who has close family ties to the city, the company are tackling this 300-year-old story in a stylised and energetic production. The talented cast, who hail from both Derry and Donegal, will perform two shows at the Millennium Forum this Saturday, June 9 at 3pm (relaxed and dementia friendly performance) and 7pm. Pupils from two local secondary schools will also join the cast through Stage Beyond’s outreach workshops which recently also saw St Cecilia’s College host rehearsals with the company which is supported by the Arts Council of Northern Ireland. Dee Conaghan, company manager, said:  “Stage Beyond is excited to develop its diversity and inclusion through the outreach projects we deliver, as some of our school pupils will also perform in ‘Gulliver’s Travels’ alongside our existing members. “Young people from Lisneal College and St Cecilia's College will take to the high seas to become the Blefuscans who plan to invade Lilliput. This is an ideal opportunity for broadening the experiences of both the youth of Derry and members of Stage Beyond theatre company. “Using multi-media and a simple set, the company take you on the epic and outrageous journey to Lilliput where Lemuel Gulliver finds himself stranded - a giant amongst a nation of tiny warriors. And Jonathan Swift himself, creator of this literary treasure, narrates the story throughout.” It’s been a labour of love for Dublin-based writer and director Conall Morrison to return to Derry to work with Stage Beyond, the Millennium Forum’s resident theatre company for young adults with learning difficulties. Although he was born and grew up in Co. Armagh, both his parents were from Derry and it has always been a place close to his heart. His late father Jim Morrison moved to Armagh to take up a teaching job. While Conall’s mum Ann continues to reside there, they still have family living in Derry and no doubt some of them will be among the audience on Saturday. Morrison, who has worked extensively with companies including the Abbey Theatre, has thoroughly enjoyed harnessing the skills and creativity of Stage Beyond with an adaptation of ‘Gulliver’s Travels,’ which they have wholeheartedly embraced. He said: “I was aware of the high level of ambition behind the company.  I came and watched them do some work preparing for another show and there was such wonderful energy and creativity in the room. “As a company they are open, energetic, inventive and fully committed to the scenario of the play which is a classic satire about the folly of mankind. Theatre is all about play and Stage Beyond bring that to bear in spades. A lot of professional actors can be quite guarded but Stage Beyond throw themselves at it and that is hard to beat.” He added: “Joining Stage Beyond last year turned my life around and gave me new opportunities and skills plus meeting new people which, have all come together and helped me in getting my first lead role in ‘Gulliver’s Travels’.” Trevor McGrenra, who plays the Emperor, is one of 23 cast members from throughout Co. Donegal who attend Stage Beyond twice a week through the National Learning Network based in Letterkenny. Trevor, who also played lead roles in previous Stage Beyond productions, says: “I like working hard on the productions. I like the rehearsals and socialising with the rest of the group, it has made me more confident.” Tickets for ‘Gulliver’s Travels’ on Saturday June 9 th at 3pm and 7pm priced £10/£8 concession (Family Ticket £30 admits 4) are available from the Millennium Forum Box Office, Tel. 02871 266455.
ADVERTISEMENT - CONTINUE READING BELOW