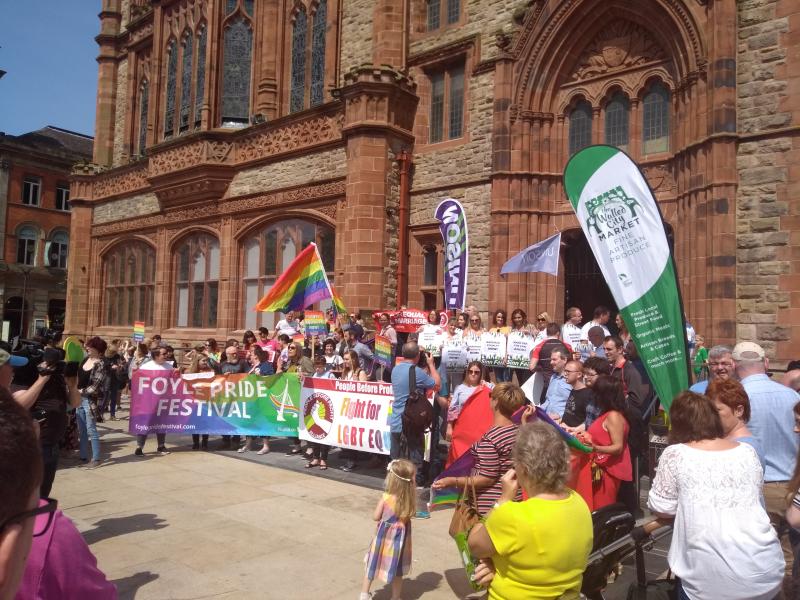 There were joint rallies held in Derry and Belfast at the weekend to apply pressure on the Conservative-DUP government to extend equal marriage rights to citizens living in the North of Ireland. Thousands turned out in Belfast where they marched to Writer’s Square, while there was also a sizeable turnout at the Guildhall. Among those who took part in Derry were staff from the Rainbow Project, as well as representatives of People Before Profit, Sinn Féin and the SDLP. The last time MLAs debated marriage equality, a majority voted in favour but the DUP blocked the move using a petition of concern. Northern Ireland is the only part of the UK and Ireland where same-sex marriage is still illegal, and the message at both rallies was very clear: for Theresa May and the British government to legislate for equal marriage in the North. Staff from the Rainbow Project received a loud cheer when they asked those in attendance if they were ready for marriage equality. Declan Meehan was one of the speakers and he said members of the LGBT community in the North were ‘tired of waiting’ and it was time to ‘let them know at Stormont’. He said: “We seen the joy and jubilation it brought in South, we want the same here. They can't tell us we aren't equal. Seventy-six per cent of the public support equal marriage here.” “We have a right to love and marry, but the Tory government is currently blocking those rights and we need to send message from Derry and Belfast that enough is enough.” Other speakers called on citizens living in Northern Ireland to make change happen, and socialist activist Goretti Horgan said the same victories celebrated in the South could soon be welcomed in the North.
ADVERTISEMENT - CONTINUE READING BELOW