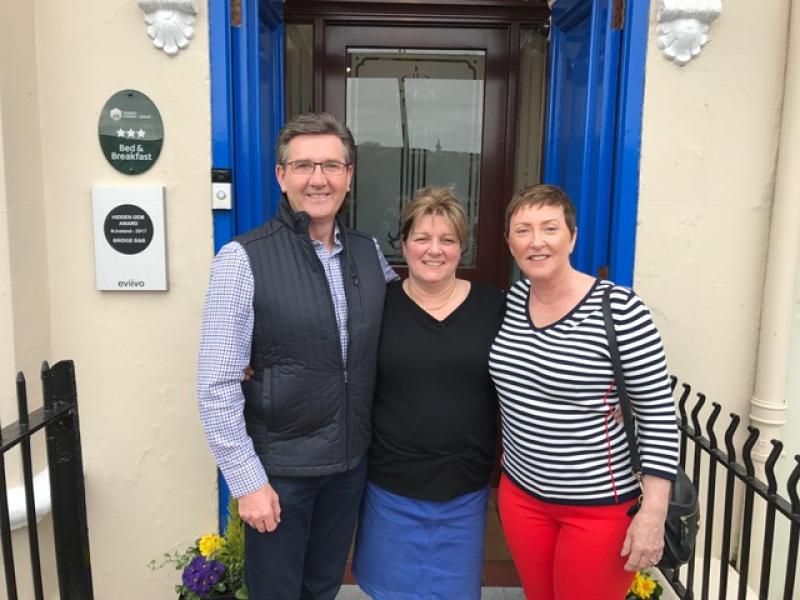 A Derry bed and breakfast owner has spoken of her delight at hosting Daniel O'Donnell and his wife Majella ahead of its appearance on their smash TV show next week. The Bridge B&B will feature on next week's episode of Daniel and Majella’s B&B roadshow The episode will air on RTE1 on Tuesday, June 12 at 8.30 pm. During their trip, Daniel and Majella arrived at Ursula Walsh’s family run B&B and met all the family before hitting the streets of Derry on their Boom Boards, a modified electric skateboard. Daniel and Majella also enjoyed a singalong with Ursula’s grandchildren, as well as Ursula and Daniel dancing and jiving after breakfast! Commenting, Ursula said that Daniel and Majella were an 'absolute sqeal form start to finish'. Bridge B&B was also recently recognised at the prestigious Eviivo Awards in London where it won Hidden Gem of Northern Ireland. Above - Ursula pictured with Daniel and Majella during their stay.
ADVERTISEMENT - CONTINUE READING BELOW