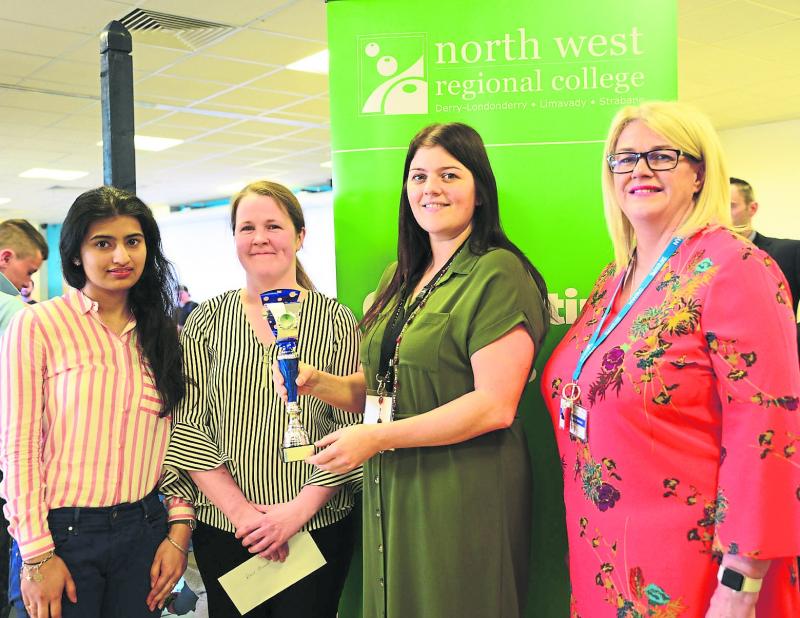 A student at the North West Regional College (NWRC) in Derry has achieved a prestigious award after designing at new prototype painkiller. The Project Based Learning Awards (PBL) awards were recently held at the college’s Strand Road campus, where Carole Dowds and her research partner Jawaria Waseem picked up the top prize for their project 'Synthesis and Analysis’. Commenting, Carole said she was inspired by her personal experiences as a mother to design a prototype painkiller that ensures toddlers are receiving specific amounts of medication. “My son suffers from Febrile fits, which is often caused by underlying infections but results in the body temperature spiking,” she said. “At that stage it is really important to get the temperature down as quickly as possible using oral paracetamols. "However, there were many times when I would get to the hospital with my son and the doctor would ask me how much paracetamol I had given him. I couldn’t give them an accurate amount because he had spat some out or thrown it up. “Jawaria and I teamed up for the project and we started looking at the possibility of using a transdermal patch to administer the medication and at the same time accurately record how much medication has been taken.” She added: ““The patch has the potential to be further developed and the next step is to further research this alternative pathway and how the body would react.” Annette Smith, Project Based Learning Mentor and Co-Ordinator, North West Regional College thanked all of the participants and sponsors for supporting the event, adding that the judges were ‘overwhelmed’ by the level of innovation on display. PICTURED ABOVE - Overall winners at the North West Regional College Project Based Learning Awards were Jawaria Waseem and Carole Dowds for their project 'Synthesis and Analysis,' with Aisling McCallion, Marketing Officer, Derry City and Strabane District Council, Award Sponsor, and Annette Smith, Project Based Learning Mentor and Co-Ordinator, North West Regional College.
ADVERTISEMENT - CONTINUE READING BELOW