Smokey Hasson: An Appreciation - 'He was a legend and a Brandywell favourite!' 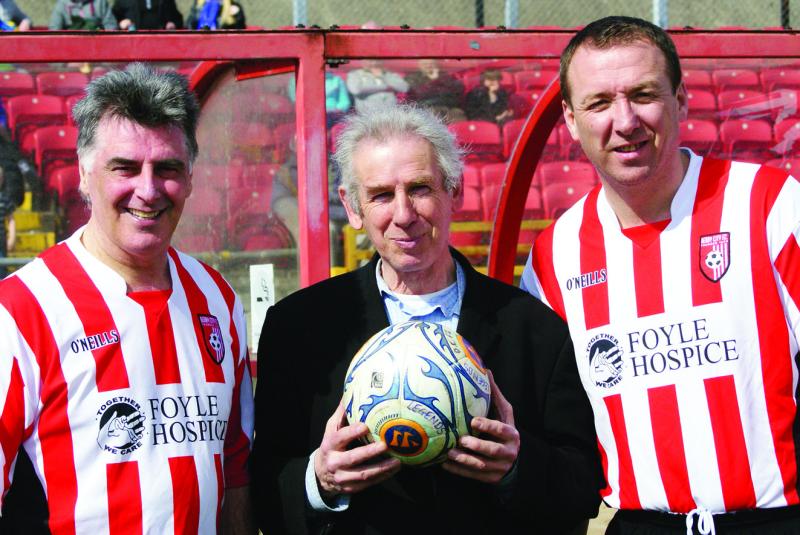 By Hugh Gallagher I had known Paddy 'Smokey' Hasson most of my adult life. Smokey was someone you associated with football. He talked about it all the time. When you met him it was no good saying 'I have to go now, Smokey...' There were the matches he played in, last year, last month, last night or this morning; the players he met and the moves he was involved in. When I met him in any part of Derry he'd be carrying a plastic bag. You didn't have to ask him what was in it; he'd show you. “What do you think of that, Hugh?” he's say, pulling something from the bag. I'd look at it. An odd time it could be a picture, a photocopy usually, of an old team mate from years gone by, or a photo of Audie Murphy or James Cagney snatched from the television. Then there was his cameras. One was usually away getting fixed, and his trusty video camera was always in need of repair. Everybody knew Smokey, nobody disliked him. I first came across him or rather heard him when he shouted towards me during Mass one time in the Creggan chapel. “Hi, Hugh. There's a match on in Iona Park the day at half five, okay?” “Okay!” I mouthed towards him. “What did ye say. You'll be there, right!” he said. Niceties didn't matter to Smokey. Neither did he care that it was snowing heavily outside or that wee Father George McLaughlin was blaming me for disturbing his sermon. I'd be there, I wasn't a 'dry weather' player and God was still in his Heaven. Smokey would produce the rig and the ball and the players. For a man of his age Smokey was fit! I saw him play two indoor football games and an outdoor match on the same day! He played alongside much younger players but they all came to respect his ability. After all, it was only his rig and his dress sense that was out of date. In recent years he'd look at boys like me and wonder why we were in the shape we were in; why we couldn't just turn out at far flung venues at the drop of a hat. I blamed my knees! And then there was his involvement with his beloved Derry City. All the players knew him. He played many times in charity games organised by Martin Mullan and the Derry City veterans. He deemed it a great honour for him to be able to run out at the Brandywell. Smokey came from a different era; a different time. I think that in his mind's eye he was still 19, running around Derry organising matches with his kit bag and tube 'n cover and encouraging people to take part in sport. He thought I was a good player. He told me so! I was flattered until it suddenly dawned on me that he told half of Derry the same thing. I was sad to hear about his sudden death. Every time I turn another corner in the city centre from now on, I'll still expect to see or hear him! ABOVE - Smokey pictured with Derry City legends Felix Healy and Liam Coyle
ADVERTISEMENT - CONTINUE READING BELOW