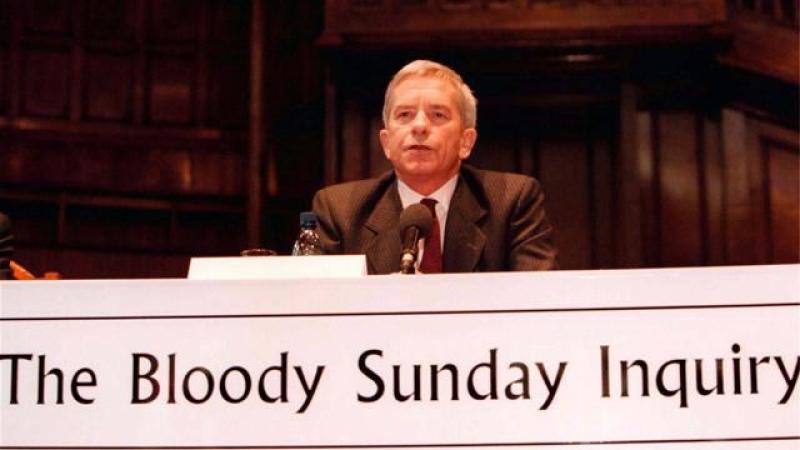 Aspects of the report by Lord Saville on the Bloody Sunday killings will be challenged at a meeting in the City Hotel in Derry this Wednesday, June 13t. The meeting organisers, the Bloody Sunday March Committee, say that, “Saville’s report has been marketed as a model for other families bereaved by State violence seeking the truth. This suggestion will be put under the microscope at the City Hotel meeting.” The organisers added: “The crucial aspect of the report was that it piled all the blame onto low- ranking soldiers and one middle-rank officer. The top brass and the Tory politicians were left totally off the hook. “This not to deny the genuineness of the joy in Guildhall Square on the day the report was published. Everybody on the march committee shared in that feeling. With the disgraceful exception of Gerry Donaghy, all the dead and wounded were declared innocent. This signalled how far we had come. “But we weren’t quite there yet. “If Saville had followed the evidence, he would have had to report on the role of General Sir Mike Jackson, for instance, second in command of the paras in the Bogside on the day, who insisted on oath that he hadn’t seen anything of the massacre. “Jackson was eventually recalled to the stand and was forced to admit that some hours after the slaughter, he had personally written out the cover-up story which was pumped out from Whitehall to the world’s media. Jackson was the father of the lies which libelled the dead. But Saville didn’t even give him a tap on the wrist. “If a finger of blame had been pointed at Jackson or at any other of the main culprits, Cameron would not have been able to say in the Commons that only a few soldiers of no importance had done anything wrong, that everybody else – the Parachute Regiment, the British Army as a whole and the British political establishment - had nothing to answer for. “Cameron was able to use the phrase ‘unjustified and unjustifiable’ because he wasn’t applying it to anybody anyone from the political or military establishments. The phrase was a calculated diversion. “The report managed to insult the Ballymurphy families, too. It said that the people who had deployed the paras to police a civil rights march and had drawn up the battle-plan for the day had no reason to believe that such murderous violence would result. “But murderous violence had been inflicted on the people of Ballymurphy less than six months previously by the self-same regiment. The military chiefs knew what they were doing when they ordered the same soldiers into the Bogside. “We have, of course, given full support to the Ballymurphy families in their own search for the full truth. We mustn’t been fobbed off by those who tell us to give over campaigning and take what’s on offer. Families have been on the march towards truth for more than 46 years. We must not give up now, irrespective of whose political plans we disrupt. Speakers include Eileen McKeown whose father Joseph Corr who murdered in the Ballymurphy Massacre, Liam Wray whose brother Jim was murdered on Bloody Sunday, Patrick Murphy former member of the Northern Ireland Civil Rights Association and Irish News columnist, Eamonn McCann journalist and longstanding campaigner for truth and justice for Bloody Sunday, Darragh Mackin of KRW Law currently representing both Ballymurphy and Bloody Sunday families and Chair, Kate Nash whose brother William was murdered on Bloody Sunday and father Alex was seriously wounded going to his aim. We invite everyone concerned with these grave issues, no matter what your political or other views, to come to the meeting in the City Hotel on Wednesday at 7.30 and join in a discussion of the lessons still to be learned from the pitiless killing of unarmed civil rights marchers in January 1972. For further Information contact Jim Keys of Bloody Sunday March Committee 07803268790
ADVERTISEMENT - CONTINUE READING BELOW