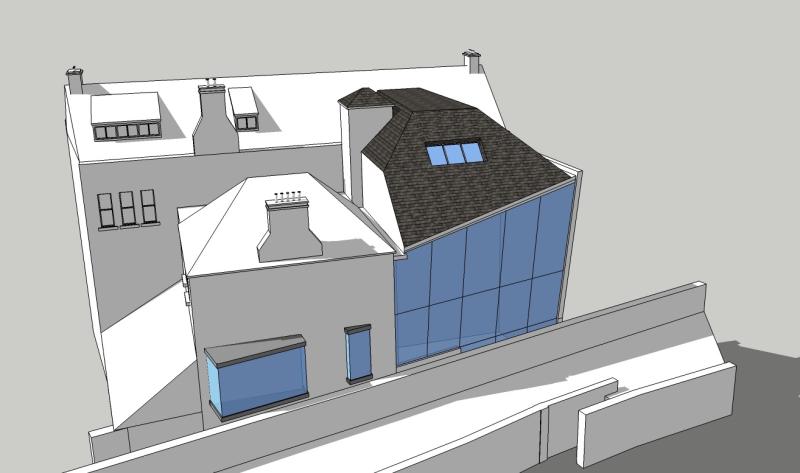 A landmark building which houses one of Derry’s oldest institutions is set to become a major tourist destination after planning approval was issued for a major restoration of the building. The Ancient Order of Hibernians (AOH) have now received permission to undertake a significant facelift of the Hibernian Hall, located at 23 Foyle Street. That will see the restoration of existing listed building, which includes internal alterations to provide a museum at attic level of the premises. One of the most striking features of the upgrade will be at the rear of building which overlooks the City Walls, which will see a glass fronted rear extension comprising atrium space with kitchen/café, main staircase and a passenger lift (pictured above). The planning application also includes the reinstatement of the first-floor balcony of Hibernian Hall onto Foyle Street. The Ancient Order of Hibernians, which is a Catholic and Nationalist Fraternal Society which traces its origins back to the 1500’s, took over the landmark building in Foyle Street at the end of World War 2, purchasing it for £7,000. The building is steeped in local history, having been the former site of the Criterion Hall. Speaking to the Derry News on Friday, Jimbo Crossan, president of the Derry branch of the AOH, said that the new look building, once completed, will explore the legacy of emigration from the north west, given that it would have been the last building many people visited before boarding the boat for the likes of Scotland. “I watch a lot of programmes on TV dealing with history, but I think that we have a wealth of history right here on our doorstep, and that’s something that we’re very keen to explore,” he said. “The new building will mean that we preserve this legacy for years to come.” Mr McCrossan added that he also hoped the new building would become a key tourist destination for those visiting the city. “I’m sure that there are a lot of descendants of emigrants who would like to know where their ancestors came from,” he added. “We already have visitors coming here, just today (Friday), we welcomed 50 members from the Ancient Order of Hibernians in America, and we’re also hosting a dance. “There’s a lot of potential for the building and that’s something that we would like to build upon.” He added that the club’s members had already raised upwards of £140,000 for the project, and would be discussing their next steps at the weekly meeting at building on Wednesday night.
ADVERTISEMENT - CONTINUE READING BELOW