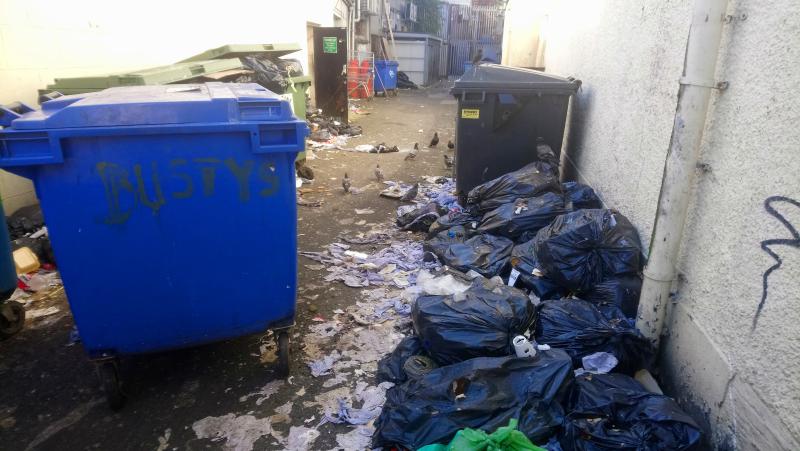 BUSINESS owners in the city centre have been reminded of their responsibilities in terms of waste disposal after a laneway was described as ‘resembling the slums of Calcutta’. The comments came at Thursday afternoon’s meeting of Derry City and Strabane District Council’s Audit, Assurance and Risk Committee, held at the Guildhall. During the meeting, concerns were raised over the ongoing fly-tipping across the city, with a number of councillor raising the issue of the ongoing illegal dumping of food waste at an alley way off William Street. The problem of illegal dumping has continued despite visits to the area by both the local council and the Northern Ireland Environment Agency (NIEA), with a number of clean-ups also carried out by the local council at the site. Speaking at Thursday’s meeting, the independent councillor Gary Donnelly said that despite the clean-up operations, the William Street laneway resembled the ‘slums of Calcutta at times’, and called on council to take actions to identify who is responsible for it. “It has been cleaned up, but then it goes back to being in a terrible state, the smell is absolutely shocking,” he said, before adding that cafés and fast food outlets were operating close by. Sinn Fein’s Sandra Duffy said that she had raised the issue of William Street previously, adding that it could form part of wider discussion at a proposed seminar on the issue of waste. Commenting, Karen Phillips, Director of Environment and Regeneration with the council, acknowledged that there was ‘definitely an issue’ with dumping at the lane. She continued that the rubbish being dumped there was primarily ‘commercial waste’, adding that while the council did not have responsibility for the site given it was private land, it had worked alongside the NIEA and City Centre Initiative (CCI) to carry out visits to businesses in the area to ensure ‘waste management’ plans were in place. Ms Phillips continued that council was also working to make the businesses aware of their ‘responsibilities’ in terms of waste. She told the meeting that one of the issues was how to prevent people from accessing the lane, but that any solution would need a ‘buy-in’ from the business community. Ms Phillips added that the NIEA were now focussing on the problem. “We are hopeful that it will lead to a solution, as it’s not acceptable,” she added.
ADVERTISEMENT - CONTINUE READING BELOW